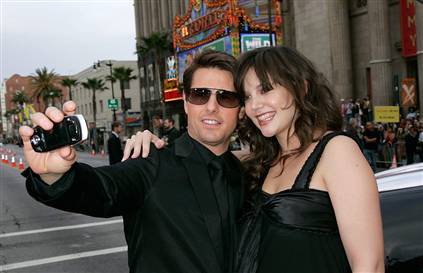 Apparently the honeymoon is over before it even (officially) began.

Tom Cruise and Katie Holmes reportedly got into a big fight — that ended with Holmes deciding to take baby Suri to Ohio to introduce the infant to family and friends. Tom, who is rumored to have a rocky relationship with Holmes’ parents, won’t be joining them, according to Life & Style Weekly.

“He told Katie he wasn’t going, considering the bad relations between him and her family,” an “insider” told the mag. “Katie was really happy he said that, because she’d been afraid to admit to him that she didn’t want him to go.”

The couple allegedly had a “huge argument” which ended with Katie declaring, “I’m doing this and you can’t stop me.” Her rep denies the story.

Cruise reportedly decided to fly his fiancée and tot to Toledo, drop them off and fly back to pick them up.

The episode, however, may be giving Holmes second thoughts. A “confidant” of hers told the mag: “Katie’s very unhappy and beginning to realize she may have made a major mistake being with Tom.”

They're kind of bi-polar, aren't they? Either they're jumping on couches or they're screaming at each other. I wonder if she still gets the $25M if they break up before the wedding. Not that she needs it, of course, but she should get something for dealing with the Crazy for a year.