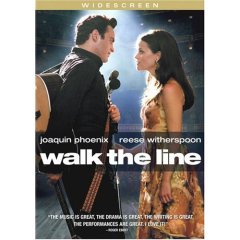 SavvyBeast and I watched Walk The Line last night and for the most part I really liked it. There were some squicky parts that made me cringe, and I thought Joaquin Phoenix played Cash a little more Commodus than necessary but other than that it was great.

The best part was that both actors did their own vocals. It was a real treat to hear Reese sing. The girl has pipes, y'all. And Joaquin was believeable as a young Johnny Cash.

I think our favorite part of the whole movie was when, early on in his career Johnny is on tour with other struggling young musicians like Jerry Lee Lewis and Elvis Presley, and one night after they roll into town for their next gig they're all hanging out and someone offers Johnny some pills. He's reluctant at first but the guy doing the offering simply says, "Elvis takes 'em all the time." Well, that just makes all the difference! How could Johnny Cash have known that following in the pharmaceutical footsteps of Elvis Presley would be bad? He couldn't, of course, and the rest, as they say, is history. And a great movie.
Posted by Kate at 7.5.06