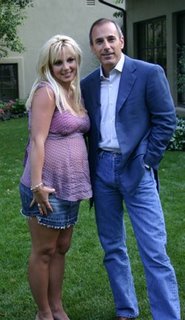 In a continuation story from yesterday, Page Six is reporting why exactly the Matt Lauer interview was so bad:

"Dateline" staffers were shocked when they showed up with Matt Lauer to interview Spears last week and found the pop star alone in her Malibu manse. "Neither of her publicists, Leslie Sloane Zelnick or Nanci Ryder, showed up," said our source. Spears insisted on doing her own hair and makeup - a regrettable decision. Web sites derided her hair as a "rat's nest" and, when she started crying during the interview, one of her fake eyelashes fell off. "When [the NBC crew] got there, they thought they had the wrong day . . . During the interview, no one was there to rein things in," we're told. Spears, when asked about Kevin Federline being with a pregnant Shar Jackson when they first met, shot back, "Julia Roberts' husband had a pregnant wife when he hooked up with Julia, but no one ever talked about that!" Spears wore flip-flops, a see-through tank and micro-mini jeans. Reps tried to control the damage on Friday. "They asked NBC not to release footage to places like E!," said a source. Asked why Spears was on her own for the interview, Sloane Zelnick said, "Britney is a grown-up and makes her own decisions.

You know, we haven't seen Brit's mom in a while. I wonder if they're just like, there is no damage control big enough to fix this. She want to rebel and make an ass of herself? Fine. When she's a welfare mom with three kids and she comes crawling back, we can salvage her career then.

Does anyone else think Matt looks really uncomfortable in that picture?