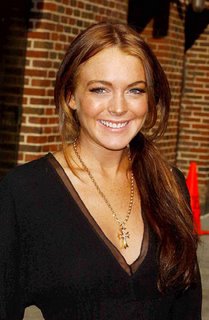 According to MSNBC, Madonna has already replaced Britney with none other than La Lohan.

"Lohan recently acknowledged that she was “looking into Kabbalah,” and now, Madonna wants to sing a duet with the potential convert, according to In Touch Weekly.

Madonna’s giving Lindsay advice on her music career, and she wants to work on a film with Madonna, too!” an insider told the mag. The source says the two talk a few times a week and are planning a “spiritual journey” once Madonna’s current tour is over. “They’re going to visit the Holy Land,” the insider says."

So have somma that, Britney! Madge is moving up in the world, okay? She doesn't need your sorry ass anymore. She's got a new vacuous hanger-on with cash up the wazoo.

So what if she's a little too tan for what some might consider to be healthy? So what if she's rumored to have a nasty coke habit? So what if she's even less talented than you are? The point is she follows orders and that's what Madge is looking for in a best friend.
Posted by Kate at 15.6.06