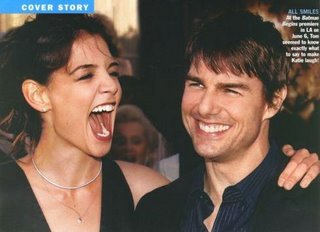 I've been laying off TomKat recently because they've been keeping a low profile. Now, however, they are just asking for it.

"Tom Cruise and Katie Holmes fans may be hearing wedding bells — or maybe the sound of a cash register. The couple reportedly have hammered out a prenuptial agreement that will give Holmes as much as $33 million and that will pave the way for the two to get hitched.

The happy couple and their lawyers have come up with a contract that will give Holmes $3 million a year up to $33 million for each year that she is married to Cruise, as well as a palatial home in Montecito, California, according to Life & Style Weekly. If the marriage lasts longer than eleven years, the contract becomes void and California's community property law kicks in — giving Holmes half of Cruise's rather sizeable fortune.

When contacted by The Scoop, Cruise's rep declined to comment, but an "insider" told the mag that Holmes's parents had been trying to get her out of the relationship — but have changed their minds and now want her to marry Cruise. “If she walks now, Tom will fight her for custody of daughter Suri , and Katie can’t outlast him in court,” an insider told the mag. “She knows she needs to marry him to get the money to fight him for custody, if it comes to that.”"

For the love of God already. I mean, even I'm bored with this.

Incidentally have you noticed how selfish they are? Totally NOT selling their daughter's first picture to the paparazzi for millions of dollars they could then donate to needy children? They ought to be ashamed.
Posted by Kate at 9.6.06