Crazy Tom Cruise, At It Again 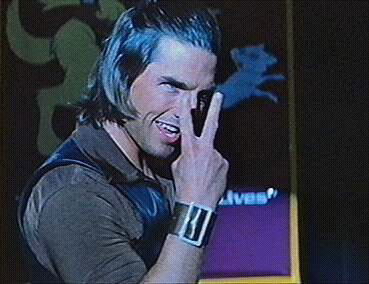 He's at it again, folks. This time, Tom has sent Brangelina a card bizarrely congratulating them on "following in his footsteps". I could not make this up if I tried:

"The 'Mission: Impossible III' star - who celebrated the birth of his daughter, Suri, in April - sent the happy couple a card with the message, "Congratulations! You're doing a fine job following in my footsteps!" written inside."

I'm starting to wonder if he's just an attention whore like Bluebell's mother. What's that I smell? A rebound hookup between the two whores once Katie dumps his ass? Yes. Yes, I think that's what I smell.
Posted by Kate at 13.6.06