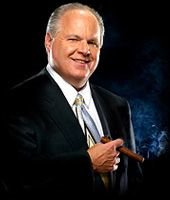 Our old friend Rush Limbaugh, that bastion of conservative morality and staunch Repuclican values, was detained yesterday for three hours at a West Palm Beach, FL airport for carrying a bottle of Viagra without a prescription.

Limbaugh joked about the search on his radio show Tuesday, saying Customs officials didn’t believe him when he said he got the pills at the Clinton Library and he was told they were blue M&Ms. He later added, chuckling: “I had a great time in the Dominican Republic. Wish I could tell you about it.”

Customs officials found Viagra in his bag, but his name wasn’t on the prescription, a Palm Beach County sheriff’s spokesman said. Investigators were still trying to determine Tuesday whether Limbaugh violated a deal he made with prosecutors last month stating that authorities would dismiss a “doctor shopping” charge if Limbaugh doesn’t get arrested for 18 months, among other terms.

Very nice, Rush. Private plane, a trip to the Dominican, and a little pokey-pokey, too.
Posted by Kate at 27.6.06