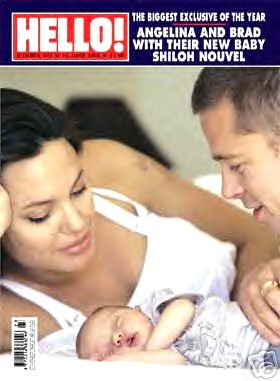 According to this website, the picture above (and below) of Angelina, Brad and little Shiloh is not a fake.

"The picture - which appears to be an upcoming cover of Britain's Hello! Magazine - shows the 'Tomb Raider' actress with her hair swept back, lying on her side with her head propped on her hand, looking down at the baby. Partner Brad is also shown, smiling and looking over their first born.

The headline reads: "The biggest exclusive of the year. Angelina and Brad with their new Baby Shiloh Nouvel."

The scramble for the first official picture of the youngster - who was born on March 27 sparked a bidding war between some of the world's biggest media outlets. Deals to secure the rights to the image have reportedly been sold for upwards of $4 million.

Lawyers for the agency which secured rights to publish the photo are now trying to find out how it came to be leaked onto the internet."