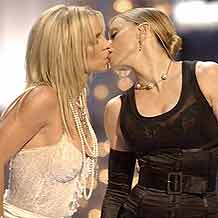 According to MSNBC, Madonna has dumped Britney.

Madonna spent a great deal of time and money wooing the younger singer into the Kabbalah fold, and it worked for at least a while; Spears was spotted wearing the trendy religion’s trademark red string bracelet and toting around Kabbalah books.

But not long ago, Spears publicly ditched the mystical offshoot of Judaism, writing on her Web site: “I no longer study Kabbalah, my baby is my religion." Spears, who was raised a Baptist, has allegedly been consulting with a “Christian Life Coach” about her troubled marriage to Kevin Federline.

“Madonna spent months teaching Britney the Kabbalah system and splashed out thousands on the ancient scripture for her,” according to a source quoted by Virgin.net, which is further reporting that Madonna is demanding that Spears return the twelfth-century book on Kabbalah that she gave her as a wedding present. Madonna’s rep had no comment by press time, but the source said: “She feels she has wasted time, money and precious gifts on Brit.”

This is like when a guy takes a girl out and then, because they went to a fancy restaurant with cloth napkins and everything, he expects her to put out later on. Shame on you Madge! Wanting Britney to sully herself like that. It's just wrong!
Posted by Kate at 13.6.06