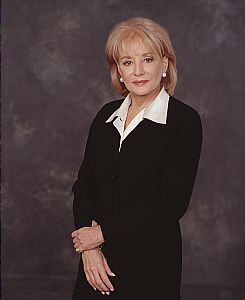 Not that we were ever going to anyway, but this story really illustrates why it's best not to eff with Barbara Walters. According to US Weekly,

Barbara Walters has prematurely kicked Star Jones off of The View. Jones surprised her cohosts and audiences Tuesday morning by announcing on-air that she planned to leave the show in July. “Something’s been on my heart for a little bit,” Jones said on The View Tuesday, “and after much prayer and counsel I feel like this is the right time to tell you that the show is moving in another direction for its tenth season and I will not be returning as cohost next year.”

After the show, Jones dished to the press: “What you don’t know is that my contract was not renewed for the tenth season. I feel like I was fired.”

You can see exactly what Barbara said by following the above link and checking out the video. Lesson to us all: don't eff with Ms. Walters.
Posted by Kate at 29.6.06