Close Call For a Drama Queen 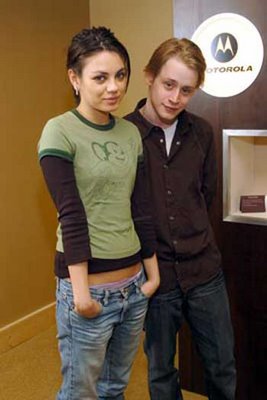 Home Aone star Macaulay Culkin and and his girlfriend, That 70s Show actress Mila Kunis narrowly escaped from Israel after their vacation was ruined by rocket fire from Lebanon. The couple were enjoying a relaxing holiday when rocket fire hit the Israeli town of Haifa, where the couple was staying. Culkin insisted the pair immediately leave the country, but Kunis was reluctant to end her holiday early, telling the Jerusalem Post, "He's a drama queen." The couple eventually decided to return to the US and Culkin told a flight attendant on their plane that wasn't the only problem the couple encountered on the trip. He said, "We went to the beach, and there were tons of jellyfish - so we figured that even the sea was dangerous."

First of all, aren't there less violent vacation spots for Americans? I mean, if you live in France or Kuwait, I could understand sunning yourself in Israel or Beirut - it's just the closest beach there is, right? But when Jamaica is just a short plane ride away, I kind of don't get why you would trek halfway around the world knowing there's the possibility that you'll get blown up.

Second, what is she still doing with him? Mila, honey, you are adorable. You could have anyone. Why are you wasting your time with Macaulay "Michael Jackson's Special Friend" Culkin? Time to move on, girlfriend.
Posted by Kate at 19.7.06