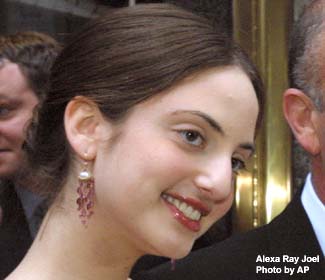 Evil Step-Father Alert! The New York Post has the goods:

CHRISTIE Brinkley's daughter, Alexa Joel, won't be sorry if her mother doesn't bite at Peter Cook's "take me back" plea reported by Cindy Adams yesterday. Hamptons sources say Cook, Brinkley's fourth husband, wasn't exactly a doting stepfather to the 20-year-old fledgling musician. "He's been very cold and mean to her," one insider told The Post's Braden Keil. "It's the main reason why she moved out when she was just 17." Their last argument occurred when Brinkley and Billy Joel's daughter, who didn't drive, called the Bridgehampton manse for a lift home at 11 p.m. Cook allegedly refused, told her to "walk home" and "never call this house at this time of night again." Alexa has been living in Manhattan ever since.

If this is true I have to give Christie a little grief here, too. Who lets their husband treat their kid like that? Billy Joel should so kick Peter Cook's ass.