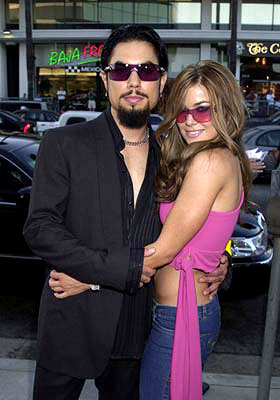 I'm not sure as of yet how I feel about this, but I was asked to report on the separation of Dave Navarro and Carmen Electra. According to E! Online, they have announced that they're "amicably separating" after less than three years of marriage.

The breakup remains a separation at this point; no divorce petition has been filed yet.

The ex-Baywatch babe and the onetime Jane's Addiction guitarist weren't even Newlyweds yet when they signed up to do [MTV's] 'Til Death Do Us Part: Carmen and Dave in 2003. They got hitched on camera [on] November 22 of that year and their wedding special aired in January 2004. The guest list included Gavin Rossdale and Gwen Stefani, Flea from the Red Hot Chili Peppers, Sharon [& Ozzy] Osbourne and Hugh Hefner.

This was her second marriage, the first being to Dennis Rodman who, if memory serves, famously wore the gown to that wedding (although I can't seem to Google a picture of it).

As I stated above I'm not terribly sure how I feel about this. On one hand I couldn't care less - it's just one more celebrity couple who made themselves available for me to laugh at. On the other hand, it's always sad when a marriage ends, although it's not like these two are going to have any trouble finding someone to help them pick up the pieces if you know what I mean, and I think you do.

Ultimately, I think it's really hard to live and work in Hollywood/L.A. and have a real, honest relaysh. Look at Brad & Jen, Nicole & Tom, or Charlie & Denise (although I think that one had more to do with booze and prostitutes than work...).