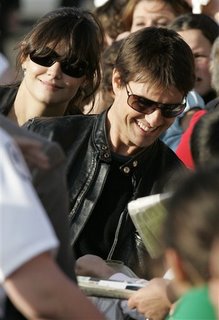 The buzz is that Tom Cruise will marry the mother of his daughter, Suri, in late July or early August in a Scientology ceremony to be performed by church leader David Miscavige.

A spokesman for the couple denies the story, but the mag quotes a “family friend” as saying, that Martin and Kathleen Holmes are “not happy” with their daughter’s “choice of where to marry.” Martin Holmes allegedly told the friend, “Katie can have a proper Catholic wedding her whole family will gladly be a part of.”Katie Holmes initially wanted a Catholic wedding, but “realized she’d never win the argument about having a Catholic wedding,” a Holmes family friend reportedly told the mag. “She knows that if she had rejected Scientology, her relationship with Tom could’ve ended.” And, at this point, the soon-to-be bride “has become a big part of the church. She is into it in a big way.”

Wow, that's great. Continue on with a religion you might not really believe in so that you don't disrupt your relationship. It's like everything with Crazy Tom Cruise is contingent on bowing and scraping to his will, no matter how utterly cranked it is.

Speaking of which, the South Park episode that skewers Crazy Tom Cruise and Scientology (you know, the one that he had banned from Comedy Central by holding his MI:III press junkets hostage), has been nominated for an Emmy.