Jean Reno: Off The Market 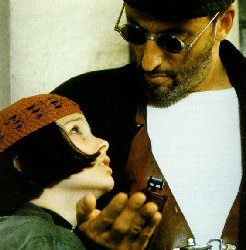 French hottie Jean Reno will soon be off the market - again. According to IMDB:

French actor Jean Reno will marry his long-term girlfriend, model Zofia Borucka, in Baux-de-Provence, near Marseille, on Saturday. Divorcee Reno, who turns 58 the following day and Borucka, 35, will wed in front of legendary singer Johnny Hallyday and French politician Nicolas Sarkozy, both of whom will act as his witnesses on the day. The Da Vinci Code star Reno owns a property in Maussane-les-Alpilles, nearby Baux-de-Provence, in the south of France. Baux-de-Provence's Mayor Jouve, who will marry the couple, explains, "Jean is a friend of mine. When he comes to Baux, he always come and visit me. We recently watched the World Cup final together."

Good for Jean. I love that picture of him from The Professional. Remember when Natalie Portman was just a child actress? And Gary Oldman was fabulous as the crazy police officer who kills her entire family ... sigh ... good times.
Posted by Kate at 26.7.06