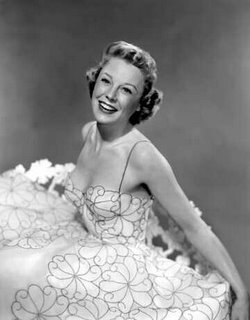 June Allyson, the stage, film and television actress best known for her girl-next-door charm and winsomely husky voice in such 1940s MGM classics as "Good News" and "Little Women," has died at age 88, her husband said on Monday.

Allyson, who had been in declining health since undergoing hip-replacement surgery a few years ago, died on Saturday at her home in Ojai, California, northwest of Los Angeles, from respiratory failure and acute bronchitis, said her spouse of 30 years, David Ashrow.

Born Ella Geisman in the Bronx, New York, she was brought up in near poverty and overcame a childhood accident that left her in braces for four years, eventually teaching herself to dance.

Auditioning for a Broadway show on a dare, the bubbly blond performer landed her first professional appearance in the chorus line of the Rodgers and Hart musical "Sing Out the News."

Allyson made her feature film debut in the 1943 big-screen version of the Broadway musical "Best Foot Forward," reprising the ingenue role she played two years earlier on stage in a production choreographed by Gene Kelly.

Under contract with Metro-Goldwyn-Mayer, she went on to play wholesome, perky roles in a string of light comedies, musicals and romances, including "Music for Millions," "Two Girls and a Sailor" (the first of five pairings opposite Van Johnson) "Little Women" and "Good News." In the latter two films, she starred opposite Peter Lawford.

She won a Golden Globe Award for her 1951 role in "Too Young to Kiss," where she played a talented pianist who poses as a child prodigy to gain an audition for a music impresario who is holding tryouts for a kids' concert tour.

As the 1950s wore on, Allyson grew into roles as the supportive wife in such films as "The Glenn Miller Story" and "Strategic Air Command."

Although ranked as one of the ten leading box office stars in the mid-1950s, her Hollywood career waned at the end of that decade and she moved into television, starring in her own drama anthology series, "The June Allyson Show," which ran from 1959 to 1961.

She returned to Broadway in 1970 to succeed Julie Harris as star of "40 Carats," her first stage role in two decades, and continued to make occasional TV and film appearances through the 1990s.

Allyson also headlined a national tour of the stage musical "No, No Nanette" in the 1970s.

She was married to actor Dick Powell, with whom she co-starred in the 1950 films "Right Cross" and "The Reformer and the Redhead," from 1945 until his death in 1963.

Later, Allyson twice married and twice divorced Powell's barber, Glenn Maxwell. In 1976 she wed her third husband, Ashrow, a retired dentist, with whom she appeared in the stage play that year, "My Daughter, Your Son."

I loved her in "Good News" with Peter Lawford. Talk about the girl next door - she was so blonde and perky you almost had to hate her on site, except you couldn't because she was so damn nice! I do feel a little bad because, to be honest, I thought she had died years ago. When she stopped doing adult diaper commercials I thought that was it. I guess you never can tell.

I was going to title this post "June Allyson. Finally Dead.", but even I'm not that callous. Although I did think it and am repeating it here so I am callous, just not that callous.
Posted by Kate at 11.7.06