Layin' the Smack DOWN! 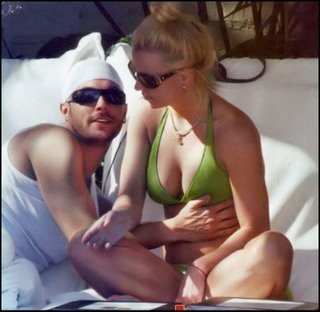 Britney cracked the whip recently on K'Fed and the pool boy who were getting a little too close...

Brit has fired her pool maintenance man, Jon LaLanne, who just happens to be the son of world-famous fitness guru Jack LaLanne. He was apparently talking too much to her husband and Britney didn't like that.

At least that's the story according to him and now Jon is speaking out and he tells In Touch Weekly, "(Britney) is not the nice person everyone thinks she is."

"She came out screaming at Kevin for lying around, then looked at me like I was to blame." Britney's account manager called Jon the next day and told him not to come back.

"She wants Kevin on a leash," he tells the weekly magazine.

Or maybe she wants you to do the job she's paying you to do, as opposed to being the bad influence you clearly are over the impressionable K'Fed. Just a thought.
Posted by Kate at 27.7.06