A little too quick? 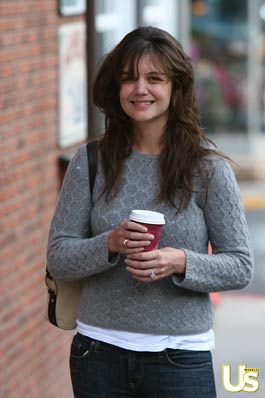 Katie Holmes has hit back a rumors she is already expecting her second child with fiance Tom Cruise. The former Dawson's Creek star has rarely been seen in public since giving birth to daughter Suri on April 18. And one of the couple's neighbors tells American publication Us Weekly, "I heard from a lot of people that Katie is pregnant." Holmes was spotted in Telluride, Colorado, on Monday, where Cruise has a holiday home. She immediately hit back at the reports telling the magazine, "I am not pregnant again." During the star's outing in Colorado, she was accompanied by a girlfriend and was seen window shopping and sipping a coffee. Holmes once again did not have her new baby with her, much to the dismay of onlookers. She told the assembled crowd, "Suri's doing great! She's back at the house."

Does anyone else think that was bit vehement for a new mom? I mean, yes, of course there are stess-related agitations and, perhaps ... not post-partum depression ... but maybe 'the blues', following the discharge of another human being from your body.

However, her 'I am not pregnant again' (as opposed to a friendlier, 'Nope, not yet'.) seems incredibly forceful and filled with something akin to rancor. Am I reading too much into this?