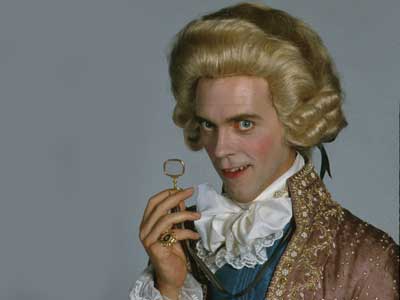 E!Online is reporting that Hugh Laurie is getting a big, fat raise for playing Dr. House on the Fox drama House.

After correctly diagnosing that, despite the recent Emmy snub, Hugh Laurie's Dr. Gregory House was 99.9 percent of what made 17.2 million viewers return to the Fox drama week after week this year, the network and NBC Universal have rewarded the British actor for his Golden Globe-winning ways.

Laurie will be pulling down between $275,000 and $300,000 per episode next season for his role as the sarcastic yet brutally honest doctor with a limp of gold, a substantial increase from his starting salary, which reportedly was in the mid-five figures.

I have to admit that I don't watch the show because, well, I don't like it. However, I've loved Hugh Laurie for ages, ever since he played the ridiculous Prince George, son of England's King George III (the one who lost the colonies for England and who later when stark raving mad - see the Madness of King George in which Rupert Everet played the son, Prince George, but in a much more sinister way) in the brilliant Rowan Atkinson comedy Blackadder.

If you've missed Hugh Laurie's fabulous forays into comedy, get yourself to Netflix immediately and remedy the situation.
Posted by Kate at 14.7.06