Nothing but a Hound Dog 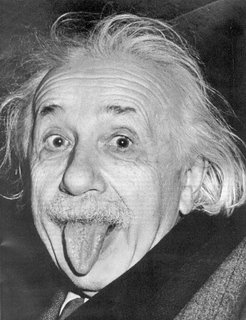 Albert Einstein was a bit of a ladies many, apparently:


LETTERS in which Albert Einstein openly discusses his girlfriends and moans to his wife how they showered him with "unwanted" affection were made public for the first time this week.

The large collection reveals the private life of a much younger and good-looking Einstein than the iconic image of the old man with a mane of white hair, talking about his extramarital affairs with his second wife, who reluctantly accepted his philandering.

The letters were released by the Albert Einstein Archives at the Hebrew University of Jerusalem. Spanning almost 3500 pages, the correspondence encompasses letters to and from his first and second wives and his two known children between the years 1912 and 1955.

The letters confirm a more rakish and human image of Einstein that first began to emerge two decades ago with private correspondence and the use of suppressed manuscripts.

Einstein's dalliances feature in the almost daily letters he wrote to his second wife, Elsa, herself once the subject of his extramarital attentions, and to her daughter Margot while away from home. Although Einstein's wandering eye will not in itself be news, the letters fill in many details to create a much more detailed picture of Einstein.

You can read the rest by clicking the link. I'm a little disappointed. I've always liked Einstein. He always reminded me of the kindly grandpa you could talk to about politics and religion and he'd listen to you yap about what's right and what's wrong in the world and then he'd sigh and tell you how it really is. I guess this is the sigh...