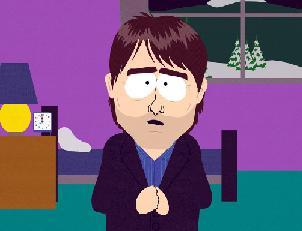 Funny that in the previous post I mentioned that the South Park ep that skewers Tom and Scientology was nominated for an Emmy because according to E! Online, Comedy Central is FINALLY going to air it!

One week after South Park's controversial "Trapped in the Closet" episode garnered an Emmy nomination, and nearly four months after it was abruptly pulled from rotation on the cable net, Comedy Central has finally acquiesced and will allow the Scientology-skewering episode back on the air.

And clearly not a moment too soon.

"If they hadn't put this episode back on the air, we'd have had serious issues, and we wouldn't be doing anything else with them," cocreator Matt Stone tells Variety.

As the conspiracy theory goes, the Cruise's camp had a hand in deep-sixing the episode, with the litigious actor reportedly threatening threatened to pull out of promotional duties for Mission: Impossible III. (Viacom is the parent company for both Comedy Central and Paramount, the studio that was releasing Cruise's film.)

Cruise's reps vehemently denied such allegations, but the South Park brain trust stuck by its guns.

"I only know what we were told, that people involved with M:I:III wanted the episode off the air and that is why Comedy Central had to do it," Stone says in Variety. "I don't know why else it would have been pulled."

Now, Cruise's saturation-level publicity tour is over (and proved fairly ineffective, with the sequel grossing a disappointing $133 million domestically) and he is apparently in hiding with his new baby.