A Trifle Bitter Are We? 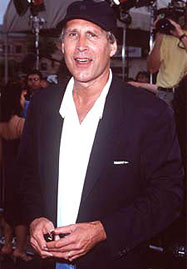 I don't know what Chevy Chase's problem is, but Vince Vaughn seems to be a big part of it.

The 'Caddyshack' actor has laughed off suggestions that Vaughn is a modern day version of himself and insists he has never even heard of him.

Chase launched into the bitter tirade after watching the trailer for Vaughn's new movie 'The Break Up', in which he stars with real-life girlfriend Jennifer Aniston.

He fumed to America's New York Post newspaper: "Recently, I saw a commercial with, is it Nicole Kidman? No, no Jennifer, what's her name, from 'Friends'. And some guy. I had never seen him. I don't know who the f**k he is. He looks like some refrigerator repairman."

Perhaps Chevy has never heard of Vince because he's been living under a rock for the last ten years. This sounds a lot like sour grapes and it's really a shame. Chevy used to be a really funny guy and now all he can do is bitch about the next generation. Insecure, much?