The View Gets Record Ratings Without Jones 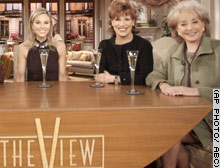 You know, dear readers, how I hate to beat a dead horse. But,

ABC is reporting that for the week of July 3, talk show The View had its best-ever ranking in women 18-49, its key demo.

What it classily does not hammer on is that that is the first full week of a Star Jones Reynolds-less show, though it does point out it was a week filled with guest hosts.

It's too much. The maniacal laughter peeling through my apartment right now is me, giggling uncontrollably over this, yet another, slam on Star Jonesing for Attention. Oh, how I love it.

And now, I'm off the last ever Savapalooza. Probably I'll be sober enough to post on Sunday, but if not, I'll see you all Monday morning when a full recovery is expected.