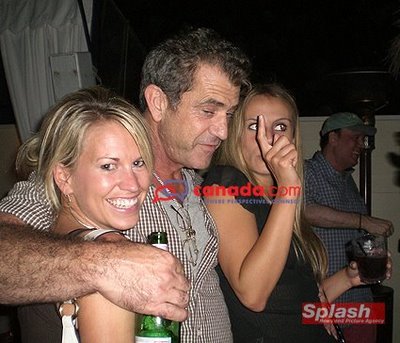 I thought I'd start off the catch-up process with the one story everyone is still talking about even though it happened more than 24 hours ago. Mel. What was he thinking? Or not thinking? Or drinking? The Enquirer reports:

"Mel grabbed a bottle of vodka from behind the bar, poured himself a drink- and filled an empty water bottle with the clear booze. Then he started sipping out the water bottle. Everyone thought it was just water. It was straight vodka!"

So now we know what he was drinking, but what was behind his complete meltdown? Again, the Enquirer helps us out.

"The combination of the blistering heat, torrential rain and an over-budget and behind schedule film sent Mel around the bend. He constantly fought with the cast and crew. He showed up on the set disheveled, confused and talking to himself. He was drinking heavily at night. He began to elude his security guards and take off. They'd find him hours later dancing the mambo at local cafes drunk as a skunk."

Man, I know when things go wrong on my movie sets I totally flip out and people know they need to watch their back because I just get off the hook.

What's that? You don't appreciate my sarcasm? Well, tough. Mel Gibson is one of the wealthiest and most successful movie stars of our time. Call me when he has a real problem.
Posted by Kate at 4.8.06