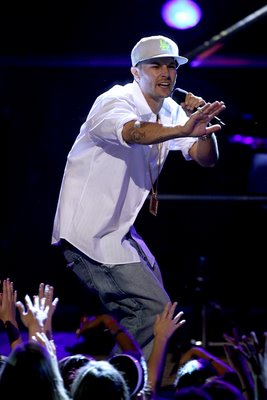 To mark his history making and legendary performance at the Teen Choice Awards, rap icon, Kevin Federline, was all set to hold court at his after-party in Los Angeles Sunday. Jessica Simpson, Dane Cook, Mischa Barton, Brandon Routh, the Olsen twins and Nelly Furtado were just some of the big names invited, but the only celebrity to show up was his wife, Britney Spears. Apparently, "after everyone saw Kevin's performance, no one wanted to be stuck having to pretend it was good."

I hate to pick on him but he's such an easy target. Anyone who loves themself this much, but sucks so bad is just too good to be true.
Posted by Kate at 24.8.06