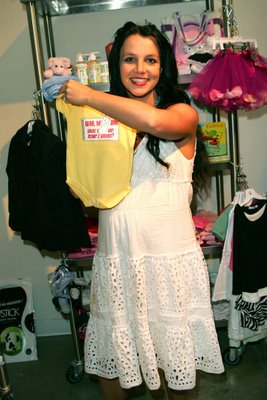 Britney Spears wants a $1,200 chandelier for her new baby’s room.

The pregnant crooner — or some prankster pretending to be her — has registered online for thousands of dollars worth of baby gifts at Petit Tresor, the swank L.A. kiddie store favored by celebs. “Oh, it’s not a fake, she’s having a baby shower soon and has told friends that they can order gifts from the site,” a source tells the Scoop, adding, “It’s not like she’s expecting her friends to buy everything for the baby. She’s already spent like $30,000 at the store.”

And the accessories and furniture strongly suggest that, as rumored, Spears is expecting a girl: although the chandelier features little airplanes, there’s a preponderance of pink and frilly goodies among the merchandise.

The woman is worth a zillion dollars and she's registering for a chandelier? And lets add to that the fact that you're not really supposed to have a shower for the second kid. Didn't anyone ever teach you that, Britney? Oh, wait, that's right you're country, so you wouldn't know any better. Honestly, that excuse is starting to get very old. I'm starting to think that "country" is just lingo for "ignorant hick".