Did He Know, Or Didn't He Know? 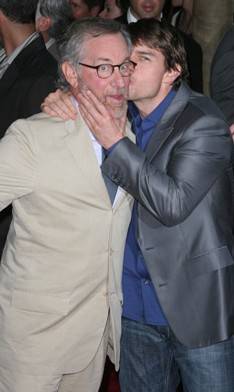 Hollywood filmmaker Steven Spielberg insists he had no prior knowledge of Paramount's decision to end their partnership with Tom Cruise, declaring he was stunned by the news. Spielberg's Dreamworks company is owned by Paramount Pictures and has directed Cruise in Minority Report and War of the Worlds. Spielberg also owns the talent firm Creative Artists Agency (CAA), which represents Cruise. When Sumner Redstone, the chairman of Viacom - Paramount's parent company - announced the studios would not be renewing Cruise's 14-year production deal due to his "recent conduct," internet gossips claimed Spielberg was aware of the decision. However, his spokesman Marvin Levy tells the New York Daily News, "Steven had no advance knowledge of Sumner Redstone's position. The story broke when Steven was on an airplane. He found out when the plane landed." Spielberg's producing partner Kathleen Kennedy has lashed out at reports the director was unhappy with Cruise's behaviour during the War Of The Worlds publicity campaign last year, when he indulged in public displays of affection with fiancee Katie Holmes on red carpets all over the world. Kennedy says, "It's not true. Tom was a consummate professional. He's done nothing wrong."