I missed the Oscars this year because I was pre-occupied with other things, but what follows is my annual Emmy Slam on fashion. Obviously, I can't critize everyone who attended the Emmys, but I can try to stuff as much into this post as possible. 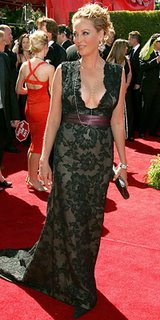 What exactly is up with Virginia Madsen's breasts? When did she have them done? How did I not notice this? Aside from the massive cleavage here, the dress is just okay. Maybe a little bit more like a badly dyed tablecloth than I would have had, but overall, not horrible. 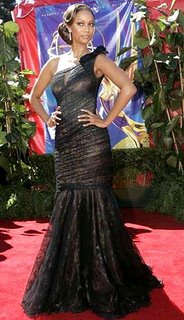 On Tyra Banks this dress is flawless. Why then does she have to put a look on her face that suggests she'll have you on all fours before morning? 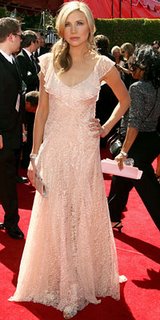 Sarah Chalke is clearly wearing the nightgown she wore when she played Wendy in the school production of Peter Pan. Sweet? Or totally wrong for the occasion? 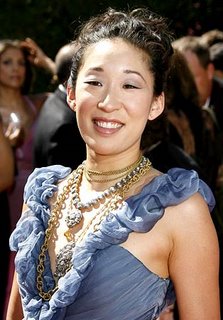 Usually I absolutely love me some Sandra Oh, but this is just not doing it for me. I won't give you the full floor-length view. Just image this going on forever. I think it wouldn't look so bad and clunky if it weren't for the chunky jewelry she's paired it with. 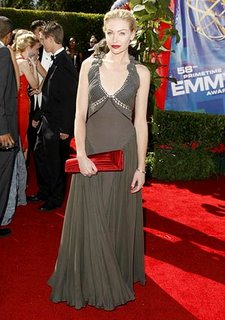 Portia de Rossi looks like she's auditioning for the role of Morticia Addams. The cut of this dress is okay, but the color is just ghastly. And to pair it with blood-red purse and lips was a huge mistake. 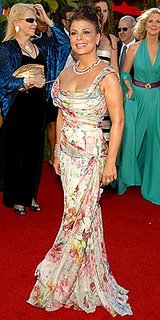 Paula Abdul has decided once again to wear someone's old curtains out in public. 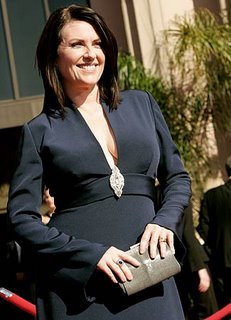 Megan Mullally's dress is nice, but it's a little boring. Almost as boring as her speech. 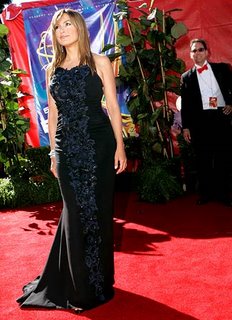 Mariska Hargitay lost the baby weight fast. Too bad her hair seems to have lost all body as well. Yawn of a dress + lank hair = bad news for Mariska. 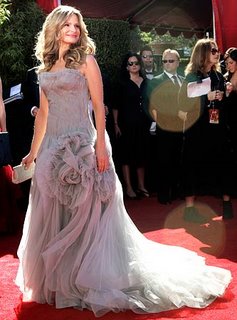 I like Kyra Sedgwick, which is why it pains me that she's wrapped herself in rolls and rolls of grayish toilet paper. Kyra, it's not experiemental. It's ugly. 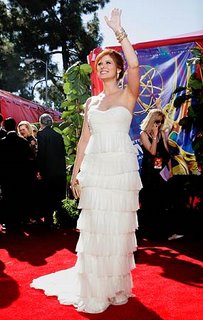 Debra Messing is wearing what looks like a tiered wedding cake that complements neither her skin tone, nor her body. Debra, horitontal stripes, layers or anything else is just not flattering, no matter who you are. 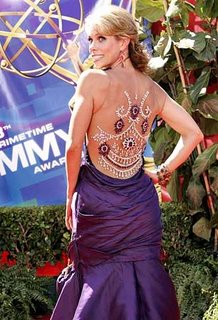 I love the concept of this dress Cheryl Hines is wearing, but the back looks just like a scary clown face and for that, I cannot forgive her. 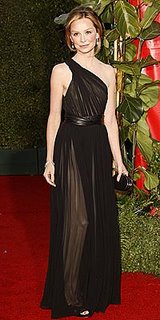 The dress Calista Flockhart is wearing is okay, but could her sour puss be more dour? And is that a layer of brown underneath the overlay of black? All hail the yuckiness. 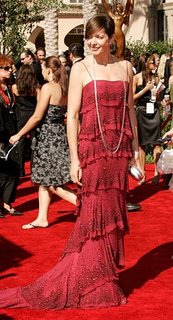 Allison Janney is almost foiled by her horizontal layers. The only thing saving her is the fact that they are relatively uneven and they've been bedazzled by something, rhinestones and whatnot. Plus with the long necklace she looks like an old-timey flapper and they're just good fun, aren't they? 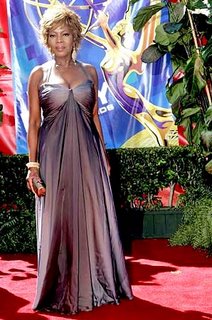 Alfre Woodard, who rocked a similar dress at the Tony's, is rocking this one, too, but not as hard. I'm not loving the color on her. The fit and fall of it is great, but the color is just blech. What's with the gray skies, Alfre? 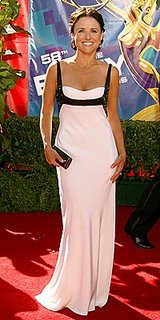 I like the concept of this dress, too. The sheath fits Julia Louis-Dryfus perfectly and it falls so elegantly, but the black sparkly lederhosen just doesn't quite work. 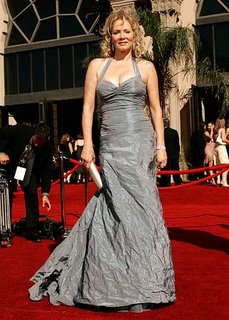 From the waist up Jean Smart looks really hot. The bodice and halter straps are great and the way the fabric wraps around her torso is fabulous. From the bottom down I am so totally hating the crushed fabric. It looks messy, as if someone forgot to iron it before she put it on. 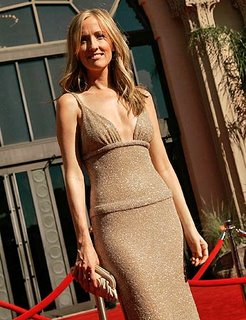 Janel Maloney looks FABULOUS. If only she could get rid of that line-breaker she's got right around her hips. Is she trying to emphasize them or what? If it weren't for that she'd totally get best-dressed in my book. 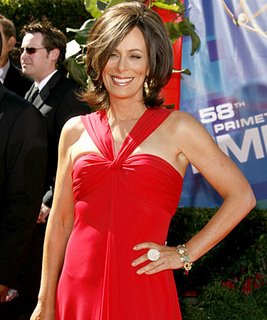 This is a great dress. I don't love the way it fits her, like maybe she didn't go to the last couple of fittings, but it's okay. I am hating, however, her hair. Talk about flattening out. 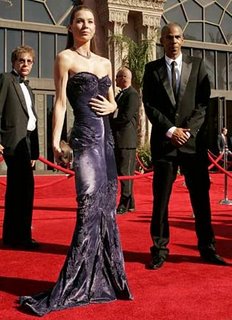 Ellen Pompeo looks like she's trying to reinvent herself as Elvira. Unfortunately, her purple velvet monstrosity is clearly impairing her breathing as she looks be about ready to expire on the spot. Good thing her hair already looks like she's in hell.

Could Helen Mirren look more like a goddess? It's like she took the worst of Debra Messing's dress, added some sleaves, a great choker, wa-la. Instant goddess. 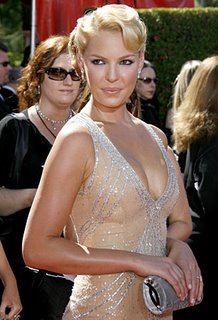 I think Katherine Heigl wins Best Dressed. The look is flawless. Hair, makeup, dress, and accessories are all simply perfect. Once I find a full-length snap I'll post, but this girl has got it going on.
Posted by Kate at 28.8.06