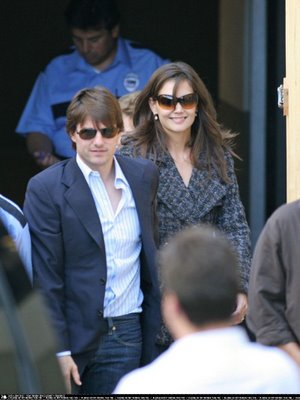 Is Tom Cruise looking to take over the government?

...Cruise has been busier pushing Scientology than anyone knew. According to a just-declassified State Department schedule, Cruise visited then-Deputy Secretary of State Richard Armitage on June 13, 2003, just an hour after Armitage had met with Washington Post reporter Bob Woodward. (It's speculated that Armitage outed Valerie Plame as a CIA spy at that meeting.) Cruise was accompanied by Tom Davis, head of the L.A. Celebrity Center for Scientology, and Kurt Weiland, Scientology's veep of communications. What was discussed? "Only Armitage can answer that question, and he's no longer here," a State Department spokesman told us. E-mails to Armitage and Cruise's rep weren't answered, nor was a call to Scientology headquarters.

But he's got bigger problems that that. Apparently, it was Sumner Redstone's wife, who took umbrage with Cruise's cavalier attitute toward post-partum depession (remember when he told Brooke Shields that all she needed was vitamins and exercize?), who really encouraged Redstone to give him the old heave-ho. Now, of course, Cruise is sorry.

Tom Cruise realizes he crossed a line when he criticized Brooke Shields last summer for her use of antidepressants, a colleague of the actor says. "That, he deeply regrets," Kathleen Kennedy, who produced Cruise's War of the Worlds with Steven Spielberg, tells the New York Daily News.

Right. I bet the only thing he regrets is having said what he actually thinks given the consequences. It's like he forgot that diplomacy and manners matter. Oh! That's a quote from a Tom Cruise movie. Remember in Jerry Maguire, when they're firing him and he says, "I'm sorry, but manners matter."?

I guess he just forgot. Is Katie Holmes morphing into the next Jackie O? That pic scares me a little.
Posted by Kate at 25.8.06