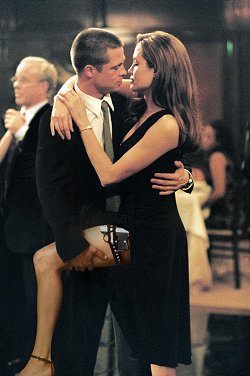 So, I finally caught Mr. & Mrs. Smith on HBO tonight and I have to say: not bad. Doug Liman directed and I love his other films (Bourne Identity, Go, Swingers) and while this one didn't quite live up to them, it was really not as awful as I had anticipated.

The Beast and I had just finished a couple of eps of American Dad (that's right, we bought the DVDs) when we switched off to find ourselves half-way through the first act of Smith. Imagine my surprise when the witty-ish repartee and big bangs entertained!

And! Bonus: Vince Vaughn as the funny best friend! How ironic that his next movie was with Jennifer where they fell madly in love. Well, in love, anyway.

Overall, it was a nice way to spend an hour and a half. Certainly it wasn't art, but I think it was definitely worth Jennifer Aniston's love and self-esteem. And really, she could do a lot worse than Vince.