Score One For Team Aniston 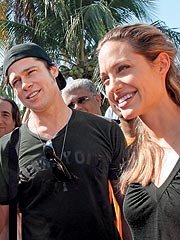 Sometimes you actually have to try to make a good impression. Angelina apparently did not try hard enough when Brad's parents flew in from Missouri to celebrate Maddox's birthday.

The Pitt’s had flown in from Missouri to celebrate Maddox’s birthday with their son Brad and Jolie’s mother Marcheline Betrand as well as visiting their grandaughter’s Zahara and Shiloh Nouvel.

However, according to Star magazine, Jolie barley acknowledged Brad’s parents and unset the teetotallers by having an open bar.

A source said: "They were the only ones not drinking and it was uncomfortable for them. To Jane, drinking is unhealthy, and she thought Angelina was intoxicated.

"Things were very tense that weekend, and they left with an even worse impression of Angelina than before. They think she is tactless and doesn't consider other peoples feelings."

The Pitts allegedly cut their trip short and returned to Missouri on the day of the party.

And you know Jane Pitt is still tight with Jen. What do you think Brangelina said to each other that night?

Brad: It wouldn't have killed you to make an effort.

Angelina: Do you know who I AM?

Brad: They flew all the way from Missouri.

Brad: Do you even know where Missouri is?

Angelina: I don't HAVE to know where it is.

Brad: I think I hate you.

Angelina: I'm taking my clothes off.