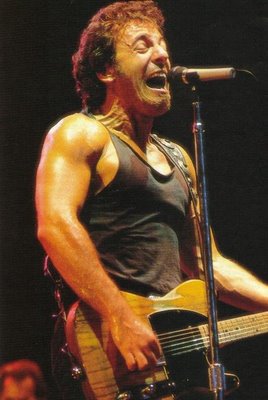 This isn't good. I don't know who broke the story first, but apparently, Bruce Springsteen has left his wife of 20 years, Patti, for a 9/11 widow he met at a 9/11 Benefit.

Bruce Springsteen has reportedly split from his wife of 20 years, Patti Scialfa, and started a new relationship with a 9/11 widow. Friends of the rocker claim Springsteen and Scialfa have separated in secret, after he fell for a redhead he met when he organized September 11th telethon, America: A Tribute To Heroes. A source tells the New York Post newspaper, "They're separated, but everyone has been sworn to secrecy. We're not supposed to talk about it." Although Springsteen enjoyed a recent vacation with Scialfa and their three children, he has been spotted near his New Jersey home with the mystery woman. Scialfa's mother Victoria tells the newspaper, "I don't know anything about it; I don't want to talk about it." A rep for the singer has refused to comment.

Does anyone else think that Ann Coulter is about to jump on this story like a jackal and tear it, and the widow, to shreds?