Suri Poops, Therefore She Is 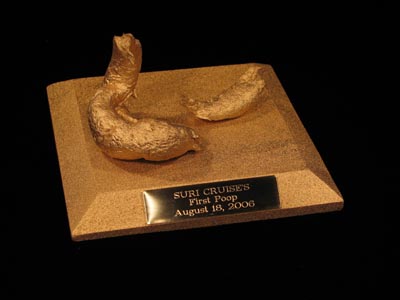 BROOKLYN, NY (August 2006) – Bronzed baby shoes are out, and bronzed baby poop is in, for Tom Cruise and Katie Holmes as they celebrate baby’s “first poop”. The commemoration of baby Suri Cruise’s first poop strives to be the evidence of her existence for a public yet to see photos of the superstar couple’s four month old infant. Suri Cruise’s commissioned bronzed baby poop goes on display August 30th at Capla Kesting Fine Art in Brooklyn’s Williamsburg gallery district and will be offered on eBay with the proceeds to benefit the March Of Dimes.

Suri’s bronzed poop is purportedly cast from the excretion of her first solid meal. “Babies mostly breastfeed for the first four months, so a baby’s first meal of solid food may be a baby’s first meal at the dinner table,” said David Kesting, director of Capla Kesting Fine Art. “A bronzed cast of baby’s first poop can be a meaningful memento for the family.” Suri’s bronzed baby poop will be exhibited under a display case until the eBay auction ends, explains Kesting, but he admits they’ve commissioned artist Daniel Edwards to produce a limited edition plaster replica.

Casting of the baby poop with a bronze finish and mounted on a base that includes a brass plate engraved with baby Suri’s name, comes at a time when Tom Cruise is increasingly known for his eccentricity. Capla Kesting assures the trend for bronzing baby poop isn’t so eccentric and simply follows the popularity of the critically acclaimed children’s book, “Everybody Poops”.

This is just way too crazy to be real. Someone please refute this immediately. Where is Tom Cruise when you need him to come out of the woodwork and laugh at how ridiculous a rumor is?
Posted by Kate at 30.8.06