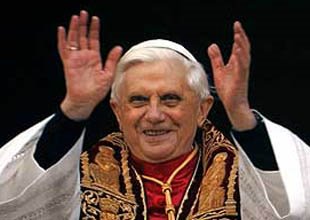 It’s incredible and a little hilarious, too, that the Pope’s quotation on Islam has caused such a firestorm. Don’t get me wrong, I’m no fan of the Pope. I am one more fallen-away Catholic who sits in at the local Unitarian Church on Sundays.

If you’re not sure what the hell the Pope said, click here. To recap the article very quickly:

In his address at the University of Regensberg in Germany on Tuesday, Benedict quoted from a book recounting a dialogue on the truths of Christianity and Islam between Manuel Paleologos II, a 14th century Byzantine Christian Emperor, and an educated Persian.

"The emperor comes to speak about the issue of jihad, holy war," the Pope said.

"He said, I quote, ‘Show me just what Mohammed brought that was new, and there you will find things only evil and inhuman, such as his command to spread by the sword the faith he preached’."

The Pope neither attacked nor endorsed the quote, he just quoted it, which seems to have put him in a rather leaky boat stuck in the middle of a hurricane.

Here’s the thing, though. This shitstorm of rhetoric on what jihad means or what it doesn’t mean is missing the point. Moderate Muslims are up in arms at the implication that Catholics (or, let’s just say it, the West) believe jihad is a bad, bad thing. When really, according to them, it's as integral as the Trinity to Catholics.

What they fail to even mention is the radical element on both sides. As long as 9/11 is fresh in everyone’s mind, moderate Muslims are going to have a hard time convincing the West that when Osama bin Ladin talks about jihad he’s not referring to the physical destruction of, well, us.

So okay, perhaps the Pope could have been a little more "sensitive". But when people remind Christians that they forcibly converted both North and South America, not to mention the hundreds of years prior to that spent "crusading", we pretty much have to say, "Yeah. That was us. Sorry about that." Is it so much to ask for some acknowledgement from them for the same?

Am I way off base here?