Why It Sometimes Sucks To Be A Girl 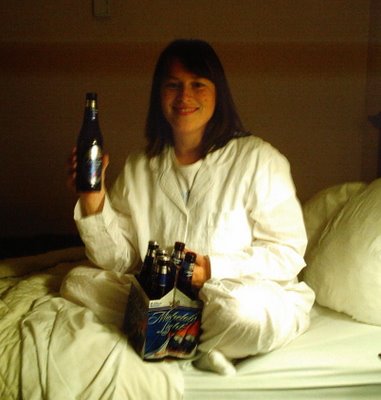 Joyous told this story in Binghamton and I laughed so hard I begged her to let me share it:

The other day I had to go down to Albany for a meeting. The meeting was in the legislative office building, which has airport type security. So, when you go through you have to put your bags in a bin while you walk through the metal detector. I put my bags in and walked through. I didn't set off any alarms, but my bag did. So, they emptied my bag THREE TIMES and ran it through again THREE TIMES.

Now, its just me and a (female) board member and 6 (male) police officers. So, the guy who is searching my bag says, "Do you have a secret compartment or something?" And I said, "Yes, right here," pointing to it. Immediately I was horrified because the secret compartment contained a bunch of tampons. So, he (with 6 guys watching him) emptied out my tampon collection.

I was SO EMBARRASSED! He said, "Actually, I'm embarrassed too." And he was. Of course we were all laughing but it was soooo bad. So, finally he pulls a tiny swiss army knife out of the secret compartment! As he lifted it up to show me, I said, "What's that doing in there?" I was shocked -- if I put it in there, it was years ago.

So he said, "I don't know, but you can't have it here." And I said, "Well throw it out!" Mind you, I was so embarrassed I just wanted to run away. But he made ME take it to a trash can and throw it out. Then I had to go through the metal detector again and repack my bag. HORRIFYING.

Now you know why we blow off steam with Michelobe and Shiraz. It's hard out there for a girl and her tampons.