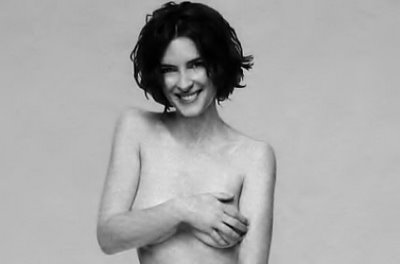 What on earth is going on you ask?

In an effort to help raise awareness for the disease, Winona Ryder posed nude for t-shirts and posters in which she is covered only with the words "Protect the Skin You're In" and "Save Your Ass".

The ad campaign and t-shirts are featured in Marc Jacobs stores, and also include shots of other celebrities, including Naomi Campbell, Christy Turlington, and Dita Von Teese.

You know what she should promote instead? Bras. Seriously, man. All those years of going without and swinging free has made her girls a couple of droopy-drawers.
Posted by Kate at 15.9.06