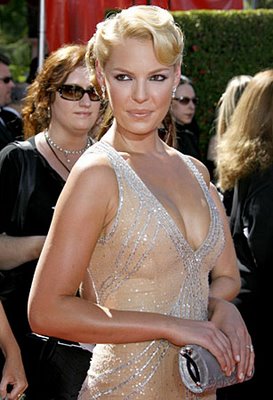 In the New York Times Online Headlines this morning these two articles appear side by side:

"Bush Joins Hastert at Rally, and Lavishes the Praise" President Bush came to the home turf of the House speaker, J. Dennis Hastert on Thursday to give him a resounding pledge of support before a revved-up group of Republican donors, activists and leaders who were clearly glad to witness a presidential lift for the buffeted dean of their state party.

The Pubs better get their stories straight. Not that I think the Dems will be much better if we take back the House, Senate or, dare I say, even the presidency. I do think they'll at least pay lip service to things like social issues and women's rights. Sort of the way the Pubs pay lip service to the "religious" right.

The picture doesn't have anything to do with this post, obviously, I just think Katherine Heigl is pretty.
Posted by Kate at 13.10.06