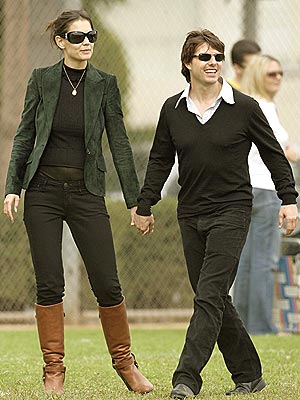 There is just so much about this picture to make fun of. Clothes and height are the two biggies, though, so let's dig right in. From head to toe, Katie looks like the Land's End catalog exploded all over her. Is that a body suit under a sweater under a blazer? And, unless you're going to be show jumping later on, what is with the boots, Katie? As for Tom he is simply trying too hard to be "normal" and failing abysmally. He's Mr. J. Crew as surely as Katie is Ms. Land's End. It's frightening.

Scariest of all is how she towers over him. After he dumped Nicole she was quoted in a magazine saying, "At least now I'll be able to wear high heels again." If he's got such a thing about his height why parade around Katie Holmes (who, by the way, has looked like a midget in all the shows and movies I've ever seen her in.) She looks like giantess next to him in her huge boots.