Who Wants to Be a Millionaire? K'Fed. 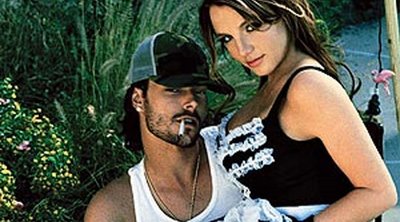 There's a reason K'Fed looks so happy in this picture - other than the fact that he's got a still-hot Britney sitting on his knee. According to Page Six:

If he and wife Britney Spears ever split, he stands to get $10 million - millions more than has been reported. "Britney was leaving Kevin but then got pregnant again," said a frustrated family friend. "He would have gotten $10 million." Federline left his wife and sons at home last weekend to party with friends and random women at Tao in Las Vegas where, according to online reports, his bodyguard slammed a camera into the face of a photographer who tried to take his picture.

As an aside, does anyone else think it's weird that we've seen nothing from Britney since Sutton came along almost a month ago?

My own personal theory is that she's hard at work regaining her "crazy and awesome" body so that she can make her comeback. That and dropping the new baby on his head every few minutes.
Posted by Kate at 6.10.06