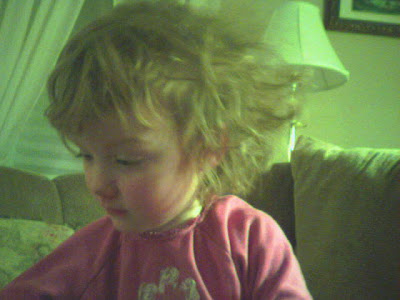 So I took a half day at work on Friday and drove up to see Joy. We were going to go out and sing karaoke until all hours, but there was a slight hitch. Little Katherine was sick. Here she is with a massive case of bed-head.

She's feeling much better now, but we ended up staying in and hanging out there. While we were hanging out we started remembering all the funny stories we've accumulated since we've known each other.

For instance, we remembered with horror the day we were taking the subway from the Cloisters museum, which is at the very northern most tip of Manhattan, down to the Cathedral of St. John the Divine, which was having an art exhibit of medieval Spanish sculpture.

Well, I was feeling a little car sick on the train so I suggested we get out and walk the rest of the way. It was only about six or seven more blocks and the crisp fall air would do me good. What I forgot was that the area of land between the northern most tip of Manhattan and the next good neighborhood is freaking Harlem.

So, yes, there we were walking arm in arm through Harlem as quickly as our little legs could carry us. There were empty shells of buildings on one side of the street and groups of young males on corners staring at us and not a safety net in sight. I don't think I've ever been so scared in my life.

Luckily, nobody bothered us but by the time we crossed the last street into relative safety we were high on adrenaline and spent the rest of the day alternating between giggling uncontrollably and looking at each other with wonder that we made it out okay. The sculptures were a bit of a let down after that.

I still can't believe I'm the one that suggested we just get out and walk through Harlem. Oy.
Posted by Kate at 14.1.07