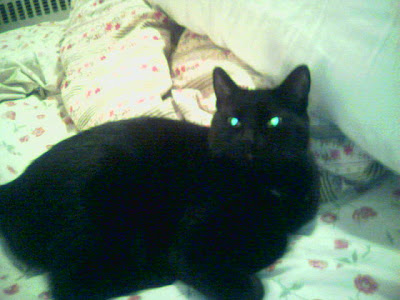 I can't believe I've been back from MN since Monday. Tuesday I had an early meeting and then a lunch so my time in the office was limited and trying to catch up on email and voicemail? Nightmare.

Wednesday I had another early meeting, then a lunch, and then an awards dinner so my time was even more limited. To make matters worse, though, I had a slight shoe crisis on Wednesday. I was wearing these great black D'Orsays with a Mary Jane strap and they were looking awesome. They're probably my favorite pair of shoes. So, it was quarter to eleven, I'm in Elizabeth and I know I've only got forty-five minutes before I have to leave for my lunch, which was in Summit - not close by. I'm just dropping something off on my assistant's desk when snap! The strap on the right shoe breaks! Like, in half!

The shoe is falling off my foot. I don't have an extra pair in the car because this has never happened to me before. Now it's ten to eleven and I have to leave soon. How am I going to fix this?

So my boss helpfully reminds me that his "shoe guy" is just right around the corner from our office. So the next thing is I'm limping through downtown Elizabeth, shoe barely staying on, trying to find this hole-in-the-wall shoe guy. You know when you're wearing slippers or flip-flips and your toes clutch the bottom of the shoe to that it'll stay on? That's what I was doing, but with three-inch heels.

Finally, the door appears and I stumble in. It's eleven o'clock and I get to the counter and say, "I'm having an emergency. Can you fix this?" I take off my shoe and hand it over.

The Shoe Guy studies the problem with a great furrow down his forehead, like a doctor examining a very special patient, and finally announces, "I can fix it. But it won't be quick."

"I'll see what I can do," he tells me as he takes my shoe to some guy in the back. I'm left in the front of the store, wearing only one shoe, to sit down in one of the chairs they have, cross my unshod leg over the other, and wait.

Minutes tick by. I try to read the Daily News but have zero interest. I think about calling my lunch appointment to push it back or reschedule, but I have another meeting after the lunch so the whole afternoon sort of hinges on me getting to lunch on time.

Just as I start to imagine the worst possible case scenario, (I miss lunch and completely alienate the person I was supposed to meet, it distracts me in the post-lunch meeting and I'm not paying attention and miss something crucial so I say something that doesn't make any sense and everyone looks at me like, what is wrong with you, you dumb bitch?) Shoe Guy reappears behind the counter. Fifteen minutes has gone by and he has my shoe! It's fixed! "Four dollars," he says.

I practically do a little dance as I put the shoe back on and pay him. He totally saved me. I got to my lunch on time and I was free to start worrying about the rest of the week.

I didn't get home until late Wednesday night because of the awards dinner and on Thursday I had another early meeting, another lunch and another late night. Then, on top of all that, on Friday I had to be in Green Brook at 7:30 am, which is quite a ways away from where I live. And on top of that, we got more rain late Thursday night and I arrived just before they closed the freaking city and started evacuations.

Friday afternoon I was supposed to host this ladies golf thing, but with the weather still rainy nobody golfed. It was almost a relief, though. Once I got back to the office from the golf meeting I had tons to catch up on so I didn't leave until close to six (which is about as late as you want to stay when you work in Elizabeth).

Today is also going to be busy. I have to get up to the County to pick up my bridesmaid dress from Jan, the woman who did the alterations on my wedding dress, I need to drop off/pick up the dry cleaning, I should stop at Verizon to take care of my phone, we still don't have a washer/dryer downstairs because our landlady is re-doing both the ceiling and the floor in the basement so we need to hit the laundromat, and of course we always need groceries. I feel exhausted just thinking about it.

It's times like this that I'm really glad we don't have kids. Instead of being able to post this I'd probably be occupied with breakfast, getting them dressed, planning some kind of activity for the day and/or trying to ignore them.

My kitty-cats are baby enough. Last night Pumpkin slept right up against my side and in the middle of the night Trixie stood on my back and started playing with my hair. Which was awesome and didn't keep me awake at all. Little does she know that I plan to interrupt her naps as often as possible today.