The best kitty ever. 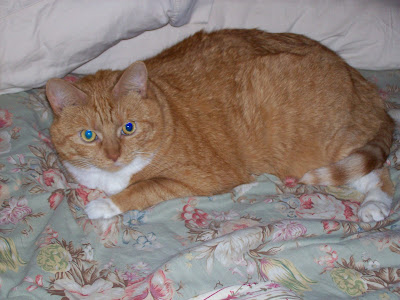 Yesterday, after a very sudden illness and an extremely fast decline, our little Pumpkin passed away.

She'd been off since Friday morning, lethargic and with a warm nose but this has happened before so we didn't worry too much. By Friday night her breathing was labored so we were concerned but again, it's happened before and she's always been fine afterward. On Saturday morning she was hiding out under the bed and we were worried. By that afternoon we decided to take her to the emergency vet referral place in Fairfield. During the beginning part of the car ride we could still hear her trying to breathe, but she didn't make it all the way there.

They took her in and we sat in the waiting room, not wanting to say the words and worries out loud. We knew it was bad. We knew we needed to prepare ourselves for the worst. But she'd been our first pet together, our baby the way we doted on her. We loved her so much. 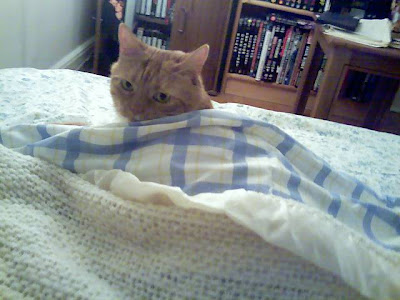 Thirty minutes later the doctor came out and asked for 'Pumpkin's family'. We jumped up right away and practically ran over. She took us into the room that they had initially taken Pump into and she said very gently, "Had you realized that Pumpkin had expired before you got here?"

At that point I lost it a little and wasn't able to speak. Thank God we were together, that we had those last minutes with her together. 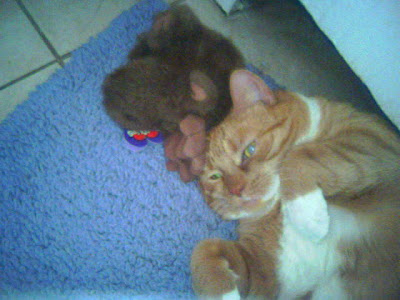 After trying to give us some explanation as to what had actually happened and coming to the conclusion that it must have been her heart, the doctor started asking questions about what we wanted to do with her body. We decided that she should be cremated since we don't have a place to bury her.

They brought her in for us to see and they had wrapped her in a light-weight white blanket that reminded me of something you would wrap a new-born in. It seemed so painfully ironic that they had wrapped her in this so that we could say good-bye to her. They'd even put a diaper on her because she'd wet herself a little bit, which only made her all the more child-like to us. 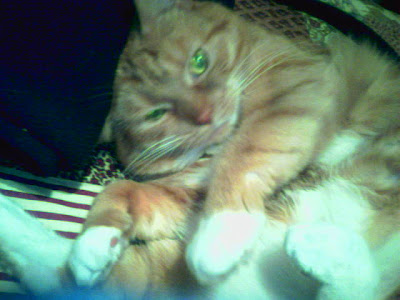 She looked peaceful and her fur was still so soft and clean. The vet assured us that she hadn't suffered.

We petted her for several minutes and I cried and then we said good-bye.

Now, her empty travel carrier is here, in the living room with me, the towel we usually put in there so that she has something that smells like us close by is still lying on the carrier's floor.

She was a good cat, the best cat. Our girl, the Lump. Plumpy-Pumpy. She got us through Savannah and she survived the move up to Jersey. She survived a trip out into the woods with Bubba, a much older and wiser cat who led her astray one night. She even survived the introduction of Trixie, a kitten we got back in September to keep her company.

She couldn't survive with the heart she had, though, and we'll miss her. 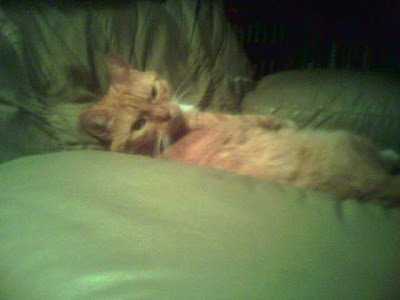