The concert was like one big party with ten thousand of your closest friends.

We started out in Hoboken, which has really turned itself around. You almost feel like you're already in the city when your walking down the streets of Hoboken. We ate dinner at a place called Oddfellows and then we jumped onto the PATH train and took it all the way up to 33rd Street.

The lines to get into Madison Square Garden were incredible and everyone seemed to be dressed up but us. There were people in parrot hats, people dressed up as pirates, people with leis on, people in coconut bras - it was awesome.

We arrived at our seats just at eight, which is what time the show was supposed to start. After only about fifteen minutes the lights dimmed and Jimmy arrived - riding a bike onto the stage! He was barefoot and he stayed that way for the night. In the mosh pit were about a dozen beach balls bouncing around like popcorn kernels in a big popper. Whenever one landed on the stage he just kicked it right back out again. 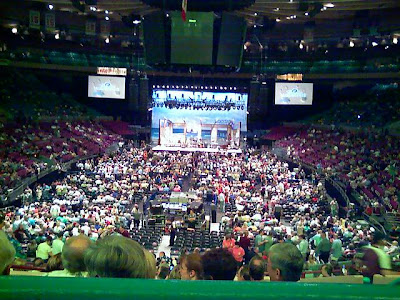 He sang all our favorites, the three slow songs I love, Son of a Sailor, A Pirate Looks at Forty, and He Went to Paris. Also, Come Monday, Fins, Volcano, Cheeseburger in Paradise and of course Margaritaville. He even came back for an encore and played three more songs, ending the show with Bruce's Glory Days.

It was such a fantastic night and an excellent pre-birthday treat. I'm having trouble uploading pics but as soon as I've got 'em I'll post.