This is from Joy's blog. I read it last week and was practically crying from laughter by the end. I hope you won't judge me too harshly, or mock me too cruelly once you've read it, too. 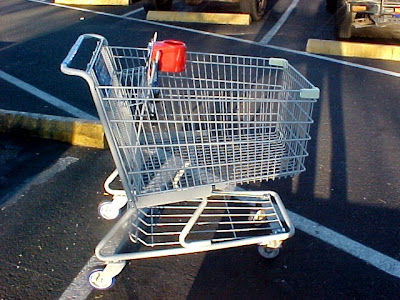 During Katester's last visit, we took a quick trip through Target.
After loading my car with the goods, Kate, being the helpful girl that she is, decided to put the cart back. Only she didn't know where the cart corral was. So instead, she moved it to an empty space in the parking lot. Except, the cart wouldn't be still.

Who hasn't had this kind of trouble? It's annoying as all hell, right?

Kate exhibited extreme patience, adjusting and readjusting the cart to try to keep it from rolling into my car or elsewhere in the lot. All to no avail. That damn cart did NOT want to be still.

Her next strategy was to move the cart to a different area of the parking lot. I'm assuming her thinking was that another location would be more level. Not so. No matter how she twisted or turned the cart, it would follow her as if magnetically attracted.

Meanwhile, I had gotten into the driver's seat of my car once we'd loaded the merchandise. I was able to observe the shopping cart incident through my passenger window and rearview mirror. In the two long minutes that I watched, the situation became (to me) increasingly hilarious.

The best part is that the cart corral was located about 5 spaces down from where we were. So, the amount of time that Kate spent messing with the cart could have been cut in half if she'd seen the corral.

By the time Kate abandoned the cart (by running away from it), I was in tears of laughter. I have no idea if any of you will think this is funny. But I can tell you that I laughed so hard my stomach hurt.