So, I went to vote this morning (state legislature and town council and mayor are all up for grabs this year) and that set off a chain reaction that I still haven’t recovered from.

I pulled up outside my polling site and fumbled with my umbrella, keys, quarter for the meter and purse, struggled out of the car, slammed the door for effect and then discovered that the meter I was at was broken. Ugh.

Well, screw it, I thought. I'll only be a minute in there voting, if I get a ticket I’ll go to court and argue that I was doing my civic duty.

I cross the street, still struggling with my umbrella, purse, etc., and I notice right away that there are two people standing at the top of the stairs of the Bloomfield Civic Center. This has happened to me before and it really annoys me. The two people are not just random people standing under an awning to get out of the rain. Rather, they’re campaign workers handing out leaflets and asking anyone who enters the civic center to consider voting for their candidates. Last year it was the Dems doing this. I didn’t look at the flyer this year. Instead, I said politely but firmly, "What you’re doing is illegal. You’re too close to the building to be handing those out."

As I stepped through the doors I hear the guy say to the woman, “She says we’re too close to the building.” I didn’t hear the woman’s response but when I left they were still standing there.

Once inside, the poll workers (average age eighty) were listening to the top forty from 1940 at a volume that was probably appropriate for their collective hearing loss, but that made it rather difficult for me to get my needs understood. I stood in one line and they looked at me like I was from another planet. They tried to find my name and after failing they sent me to another line. I went and they, too, tried to find my name, and also failed. They sent me to a third line where I repeated my name three times, spelling it twice before they found me.

I signed in, voted (for three Republicans and four Democrats), and as I left I reached into my pocket to pull out my keys and discovered – my car key was missing!

Now would be a good time to mention that this summer I switched key rings because I wanted something I could easily detach so that I could carry just my car key around in my pocket, rather than the big bulky set. So I bought this off eBay: 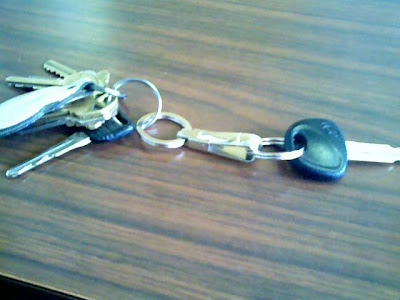 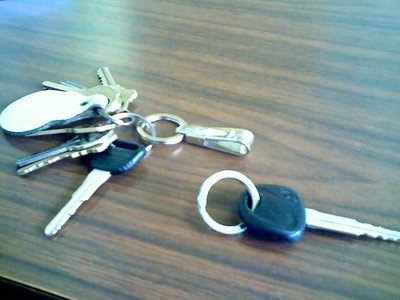 I loved it. It was perfect.

I didn’t anticipate how easy it would be to undo them without realizing it, though. Or maybe it was just the confusion of dealing with umbrella, quarter, keys, purse, voting, etc.

My key was gone, though.

I still had the big part, the house, office, basement keys, but not the important one. Not the one that would get me out of the rain and off to my morning meeting.

Where could it have gone? I’m standing there looking confused and the poll workers start yelling at me. Well, not yelling, talking, but loudly because they can’t hear anything.

"IS THAT IT?” pointing to a leaf on the floor.

After taking a cursory glance around the room I leave thinking I must have dropped it in the street on my way in to the center. The campaigners are still standing in front of the door and as I walk past they shoot me a dirty look.

Or maybe that was imagination.

Either way, I walk slowly across the street dodging raindrops and traffic to circle my car trying to find the missing key. Nothing. I cross my fingers and pray to God and then peek inside the car itself and there, on the floor of the driver’s side, is my key. Whew! Thank goodness!

Except I don’t have a spare. I know. I know! Really stupid, right?

When I bought the car three years ago it didn’t come with a spare and I’ve been meaning to get one ever since. I think about it probably every weekend and every weekend I think, “Eh. Do I really want to schlep up and down Bloomfield Ave. trying to find this one place that does these special keys? No."

So there’s no spare.

I call the Beast and he says he’s on his way, we’ll figure it out together. What a guy, huh?

Then I get an idea. My mechanic is only a couple of blocks down the street and they’re awesome guys (if you need a mechanic and you’re close to Bloomfield, Sea Breeze Auto & Tire, check ‘em out, they’re the best). So I call my buddy Vinny at Sea Beeze and he says he’ll send someone down.

I hang up and realize that the campaigners are now snickering and nodding my direction, clearly getting a kick of my predicament. I consider throwing something at them, like my shoe, but then think that then I’ll only have one shoe left and it’s raining, so I reconsider and decide to ignore them.

I wait in the rain until the Beast pulls up and parks in front of my car. I use the quarter I still had in my pocket from the broken meter to feed his meter and we wait until the Sea Breeze guy shows up, which he did about fifteen minutes later.

He got my door open no problem and handed me the key, which I promptly dropped in the street because I’m flustered and still struggling with my umbrella and the campaigners have quite a little crowd going now.

I heard the tinkle of it hitting the pavement and as I’m sitting in the car, door half-open, frantically searching for the thing, the Beast is watching me in his rearview mirror. I opened the door all the way, looking around, not seeing it. I can NOT believe I’ve done this. No sooner do I get it back than I lose it again?

He gets out and says, “What’s wrong?"

The campaigners are LOVING this.

I get completely out of the car and immediately spot it a few feet away in the street. Thank God. I pick it up, reattach it, kiss the Beast good-bye, promise to drive safe, and leave.

The rest of the trip was uneventful, but I did miss my morning meeting.

1.) Always make sure keys are intact before locking and leaving car.
2.) Maybe don't get all Judgy McJudgerson with people who are doing something wrong. This will be hard.
3.) Procrastination is bad.
4.) Always have a spare.