It's been a pretty crazy last couple of weeks.

Starting with now and moving backwards let me recap.

I just dropped my wonderful friend, Vickie, off at the airport for her 24-hour trip back to Cornwall, England. She'll fly from here to Detroit, to Amsterdam, to Bristol and finally into Cornwall. Her still-wet hair pressed between our cheeks as we hugged a tight good-bye this morning and I thought, I miss her already. Good friends are worth their weight in gold and I hate having so many of my good friends so far away. 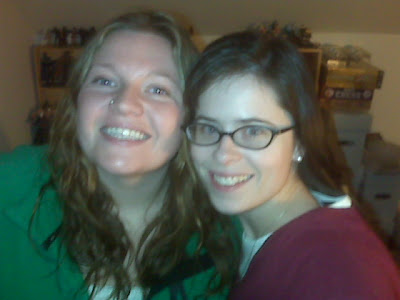 The Beast picked me up from the airport on Friday and we made it home in one piece. The weekend was all about running errands (CVS, oil change, dry cleaning), doing laundry and straightening up in preparation for Vickie's arrival on Sunday night.

Of course, during these preparations I was constantly marveling at how adorable Fiona is, while at the same time clamping down on the urge to beat her for being so mean to Trixie and Ari.

Here are a few shots of her being adorable: 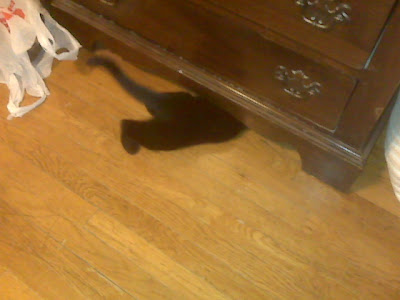 Chasing a ball under the dresser 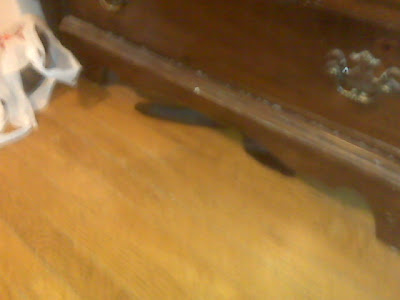 Crawling all the way under because losing the ball is not an option. 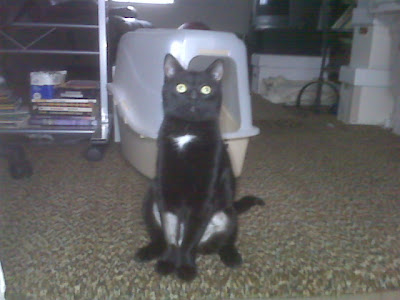 Guarding the litter box we had to set up especially for Trixie and Ari because they're too scared to come down from the attic to use the one in the bathroom. 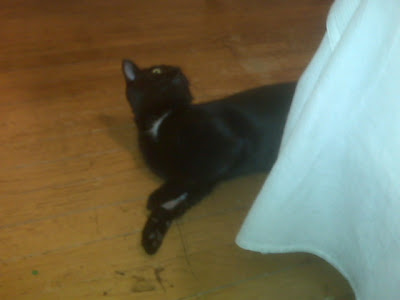 Lounging on the floor.
My week with family in MN was great. I loved catching up with relatives and friends I haven't seen in years. Here are some highlights: 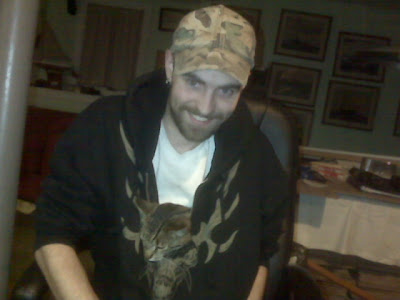 My brother Michael with his kitty cat Hazel (aka Pickles) 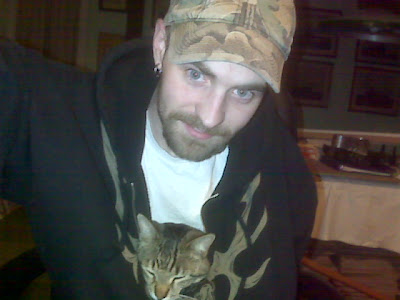 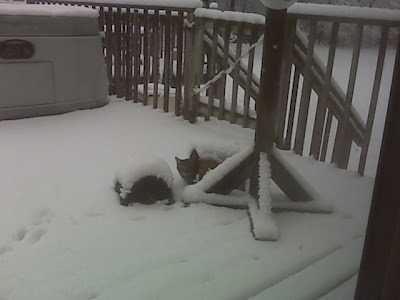 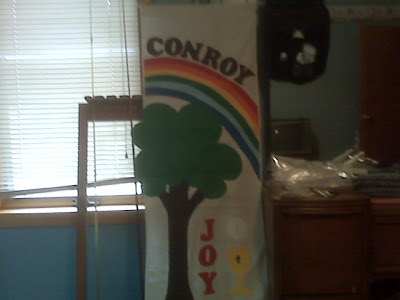 My first communion banner, pulled out of a file cabinet and handed over to my care. My parents were going through a remodel of their kitchen and laundry room so everything was getting poked into and when we found this it was a real treat. I remember being part of making it but I don't really remember anything else. I also found my first communion dress and I swear it looks like something I'd buy for a doll. The fact that I have photographic evidence that I wore it once makes no difference. 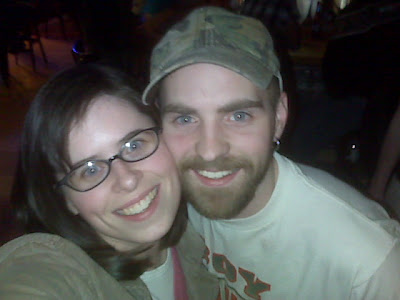 Michael and I at karaoke. We sang "When I'm 64", "Workin' At The Car Wash Blues" "Wonderboy" and a few others. Such a good time. If I lived in MN I'd go out every Wednesday night and sing with my brother.

I don't know why I don't have any other pictures. I guess in the moment I never remember to take any.

There is one more pic that should be displayed just for the sake of posterity. When I got to the airport to fly to MN a number of things happened that made me think I was absolutely going to miss my flight.

First, there was bad weather the night before so a ton of people were stranded in Newark trying to get home, which meant that on either side of me as I did the automatic check-in, the desk people were pretty busy. So I finished my check-in and waited patiently for someone to put the sticky thing on my suitcase. Then I began to wait not so patiently. And then I became disgruntled. Time was ticking and if security was bad I was definitely going to be just barely making it.

Finally I tried to interrupt but I was shut down with a "Miss, we'll be right with you. Please don't leave your suitcase." Really? Because I was totally going to just walk away from my BAG. I mean, come on.

After another five minutes they took care of me and I rushed away to find Gate A26. Except I was in Terminal C. No A gates in Terminal C. All the A gates are in Terminal A. Gah! Because I only had a confirmation number I didn't know I was flying Continental Express as opposed to regular old Continental.

So I run upstairs to the Air Train and jump on just as it's pulling away. Too late I realize it's not taking me to Terminal B and then A, it's heading toward the parking deck and the NJ Transit stop. I know that eventually it'll loop around but I have like no time left.

So I'm sitting on the train, realizing I'm probably going to miss my flight. Knowing it's my own fault. Thinking that my suitcase is headed for Minnesota and hating that I'm going to have to call the Beast and ask him to come back to the airport to get me.

So I decided to capture the moment. This me, pretty much beyond pissed off: 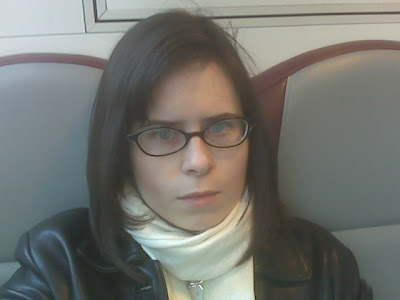 I am SO unamused by life that I really would love to just punch it in the face.

Eventually I did get to Terminal A, made it through security, sprinted with my rolling bag to the right gate and was promptly told that the plane we'd be taking hadn't even landed yet.

So I got some frozen yogurt and chilled out for an hour. Never underestimate the power of junk food to make you happy, if for only the amount of time you're eating it.
Posted by Kate at 14.4.09

Awesome and funny post. Glad you had fun with your brother, singing! Glad you're back, a and so are the kitties; now only if Ari and Trix get over their fear!

Great airport adventure! I have so been there. Welcome home and looking forward to seeing you!

those cats. they are so disarmingly cute and wicked all in on furry little package!

Great stuff on the kitties and the airport race - been there, done that. I loved the pics of your brother and happy to hear he sings also. I bet you sound great together.