I woke up this morning feeling pretty good. I was the point person for a huge dinner happening in the evening and it was all shaping up to look okay. Everything was under control and I was, mercifully, pretty calm.

Then I walked out to my car and saw in the crevice between the windshield and the hood some kind of dead animal. I had sort of noticed the tiny corpse a few days ago but I kept thinking that it would manage to figure a way out on its own. I didn't really want to investigate. Then, this morning I thought, well, I guess I should take a closer look and sure enough, it was some kind of dead animal and it was freaking stuck in my car: 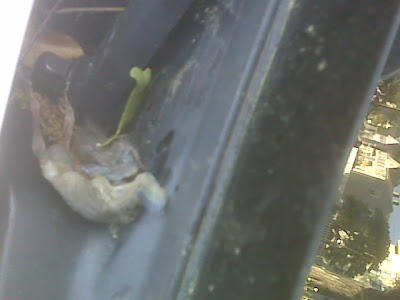 See? You can totally see a tiny little ribcage. I left it there, still believing that it would either decompose enough that one day it'll just blow away or that the Beast, being a man and my husband, could be convinced that he was contractually obligated to get it out for me.

So I drove to work, got there at about 8:30 am and banged out a bunch of work for the dinner. I was feeling great.

Then at quarter to nine the Beast called. He'd accidentally locked himself out of the house. So I drove back to Bloomfield and let him in. It was fine, no big deal.

As I was making my way back to work I was about to run a yellow light at an intersection that would have put me on the entrance ramp of the Garden State Parkway (for those of you who don't know the GSP, imagine Interstate 94 but with ten times more people than usual, going minimum 15 miles over the speed limit).

So I'm about to blow through the yellow when I notice an Essex Co. Sheriff SUV at the light kitty-corner me, waiting for his light to turn green. So I hit the brakes and skidded to a stop, hoping that he wouldn't now give me a ticket for reckless driving.

I tried to drive way, but very quickly discovered that my steering wheel was no longer communicating with my tires. Oh, shit. I'm on the entrance ramp now. I have a huge dinner tonight. I have a million things at the office that need to get done. I cannot have a car that doesn't work!

So I pulled over and put my flashers on and called the Beast, who was now on his way to work. I explained what happened and he said he'd meet me at Sea Breeze, which is our mechanic (side note: if you're ever in Jersey and you need a good mechanic, talk to the good people at Sea Breeze in Bloomfield).

I called Vinnie at Sea Breeze and he said he'd send a tow. I waited. I tried to be calm, but I wasn't. The tow arrived and he loaded the car up: 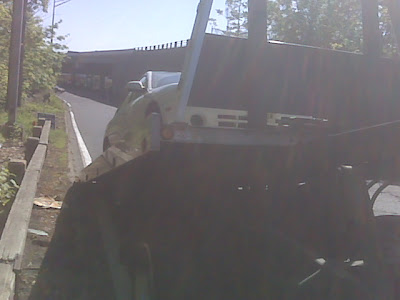 And we drove to Sea Breeze: 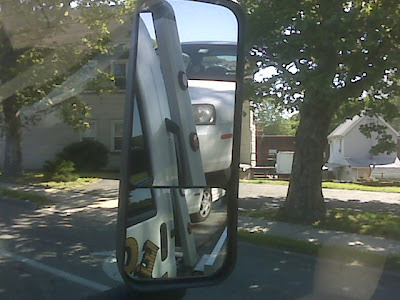 Once there, Vinnie said it looked like a busted axle, which made me very sad because an axle is the kind of thing that sounds like it would cost a lot. I told Vinnie to call me once he'd had a chance to look it over and then we left.

I drove the Beast to work and I took his car to Elizabeth. As I neared my exit I realized with complete certainty that the banner I would need for the big dinner tonight was sitting in the back seat of my car at Sea Breeze.

I will not share the stream of language that fell out of my mouth at this realization. I was angry and upset, mostly with myself for not realizing sooner where the banner was.

I got to the office, got caught up and had a little something to eat, then I drove back to Bloomfield and snagged the banner out of my car.

Later, as I was driving from the office to the event, I called Vinnie and he said it's the passenger side control arm that broke, which sounds much better to me. Others, though, who've heard the story say that that's just as bad. I dunno. I'm just glad the day is over with.

I have read that Buddhists believe that when things like this happen, when everything seems to be falling apart or breaking, it's because something wonderful is trying to get itself born and it's trying to distract you so that you don't get your sticky fingers all over the process and mess it up.

Did you ask Vinnie to do you a solid and remove the deadthing? And frankly, if the Buddhists are right my love life should be birthing diamonds and sonnets and muscular everything and worship of my feet and MORE, ANY. MINUTE. NOW. But mostly I think God just doesn't care.

LOL!! Good response, Kristen. I didn't ask Vinnie to remove the dead thing. My initial plan for the dead thing is still in place.

So fabulously dramatic! I loved listening to her sing the songs when we were watching the movie. So awesome!

Update: the dead thing has turned gray so now it looks like a bat. MP, what are you smoking and why aren't you sharing?