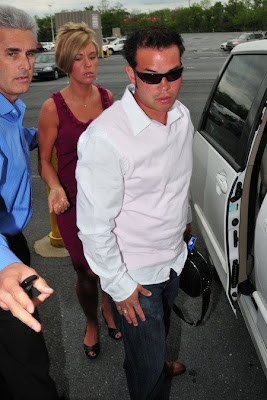 I think I've mentioned before that I'm a semi-fan of Jon & Kate's, but I have a few caveats. First, they're really, really mean to each other. Like, they say things to each other, in front of their kids, that I can't imagine saying to the Beast.

Kate tends to come off as a sweet but insane clean-freak harpy and Jon tends to seem like a man trapped in a noose of his own design.

But the kids are cute and it's kind of cool to watch this couple cope with having 8 freaking kids all under the age of 8. I guess, what I'm saying is, I don't think he had an affair, but I could kind of see why he might.

Just an hour out of the house for some peace and quiet might be enough of an inducement. I mean look at that picture of them. Even for two people caught by the paps they don't look happy.

For those of you who've never seen them in action, I give you Date Night and I defy you to come up with more ups and downs in a single six minute period:

I've watched this a few times also and agree that the meanness does show - especially on Kate's part. YouTube didn't work.makende