Another Reason To Give Up Fast Food 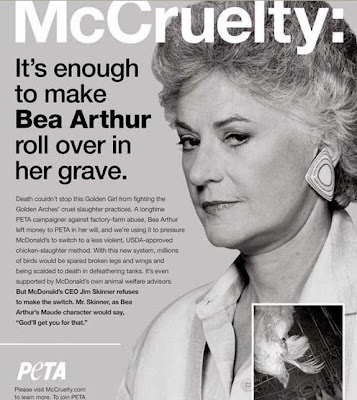 In case you can't read the fine print it says,

"Death couldn't' stop this Golden Girl from fighting the Golden Arches' cruel slaughter practices. A longtime PETA campaigner against factory-farm abuse, Bea Arthur left money to PETA in her will, and we're using it to pressure McDonald's to switch to a less violent, USDA-approved chicken slaughter method. With this new system, millions of birds would be spared broken legs and wings and being scalded to death in defeathering tanks. It's even supported by McDonald's own animal welfare advisors. But McDonald's CEO Jim Skinner refuses to make the switch. Mr. Skinner, as Bea Arthur's Maude character would say, "God'll get you for that."

It kills me that people went ape-shit over Michael Vick but cruel practices in our own food industry continue. Pigs, cows, and chickens all have horrible things happen to them -- before they die. Castrations, boiled alive to get feathers off, baby animals kept in boxes, transport without food and water, you name it.

If this makes you sick, too, let's do something about it. I haven't been to a fast food "restaurant" since I read Fast Food Nation back in 2000. Vote with your feet and say NO to animal cruelty.
Posted by Kate at 23.4.10

This is so sad.

Icky. Feeling pretty guilty about that milkshake I had from McD's yesterday.

One of our best decisions ever! - forsaking fast food franchises has worked out very well on every level.