Before I start telling about Saturday's adventures, I have to tell you about Saturday morning. In the mood to explore, we walked several blocks in what we'd been told was the direction to find shops, restaurants and the aquarium. Cool, we though!

Except every restaurant seemed to be a lunch place that wasn't open yet and we needed coffee (well, one of us did). Finally we found a mall called the Galleria that had a Starbucks inside on the second floor. The delight at finding coffee quickly paled when the guy behind us in line suddenly whispered, "It's Youk! Youk is on the escalator! He's coming up here!" For those of you not in the know, Youk is short for Kevin Youkilis, a Red Sox player. He is in fact the Beast's favorite player in baseball and also his doppelganger.

A hush fell over the crowded Starbucks as everyone tried to pretend that everything was normal and fine all the while covertly watching him out of the corners of our eyes. It occurred to us to go up and talk to him, but he had ear buds in and he was texting - the body language was easy to read: "Leave me alone, please, I'm enjoying my down time".

So we did. If I'd been at ALL on my game though I'd have tried to snap a pic or two. But I wasn't, so I didn't. You just have take my word for it that this actually happened because, well, it did.

After Starbucks we hit the National Aquarium and boy was that cool. What follows are the pics from that experience, in no particular order. 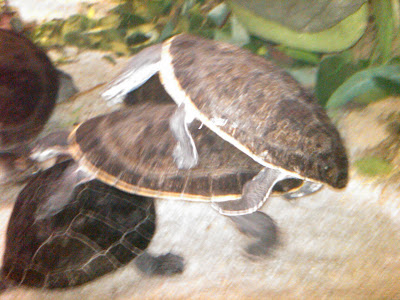 Three turtles, one of which appears to be harassing another. 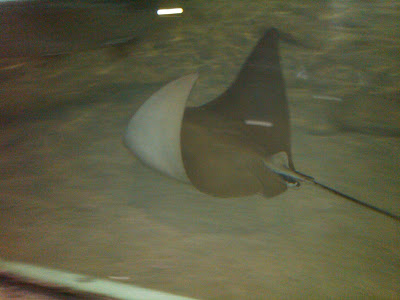 A sting ray. So graceful underwater - like a bird flapping overlarge wings. 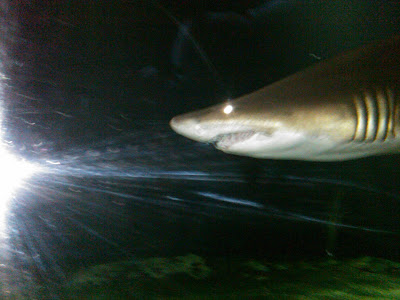 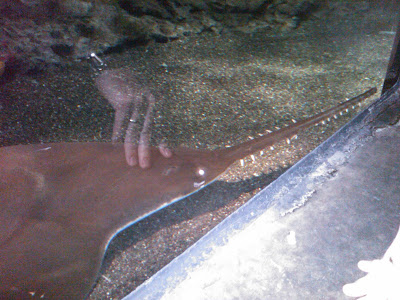 I'd love to be able to tell you that the Beast stuck his hand the tank and was petting this bad boy, but alas, this is just an optical illusion. You can see his actual hand in the bottom right. 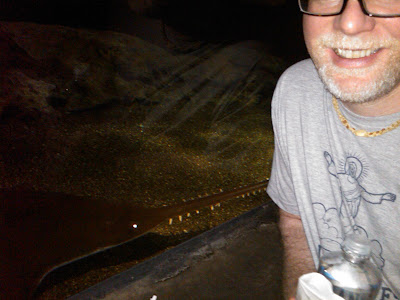 Here's half his face with the same shark. No one ever said I should take up photography. 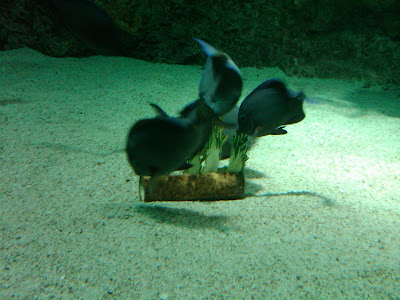 I call this one "Salad Bar" because those green things are flaps from a head of lettuce and the fish were CHOWING their lunches down. 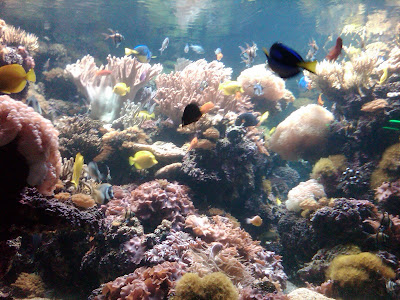 This was so pretty, I had to take a pic. It makes me think of underwater confetti. 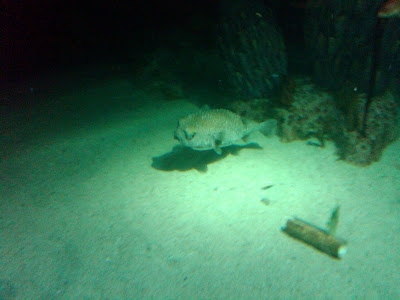 Porcupine Fish, getting ready to blow up. 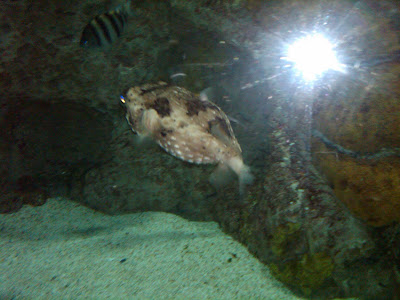 Same, from a different angle. He stopped puffing so we left without getting to see the finished balloon. 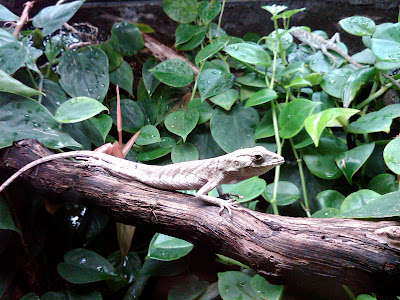 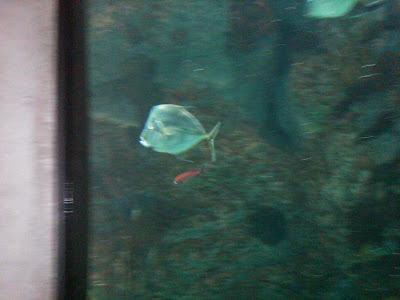 A Jack Fish. I love their flat faces. 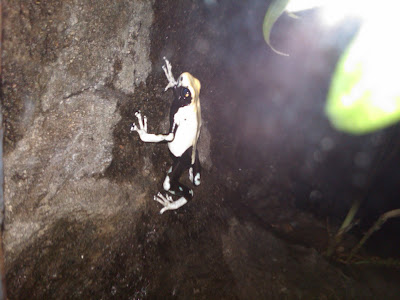 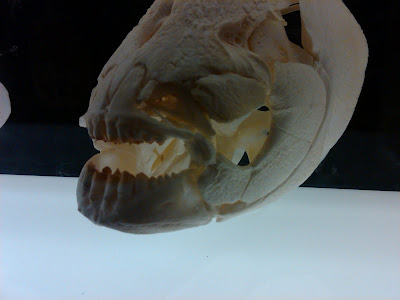 The skeleton of a huge fish with big teeth. This is why we don't go in the water. 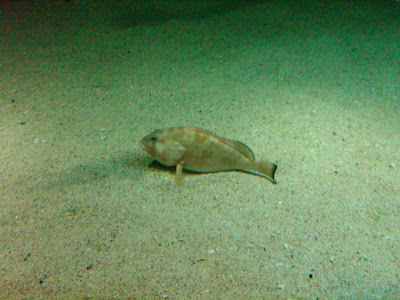 Relaxing on the bottom. 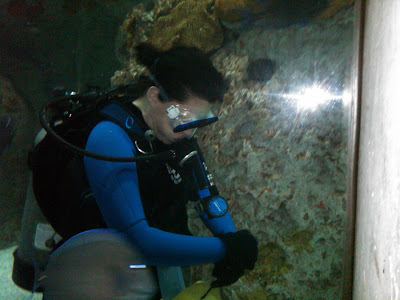 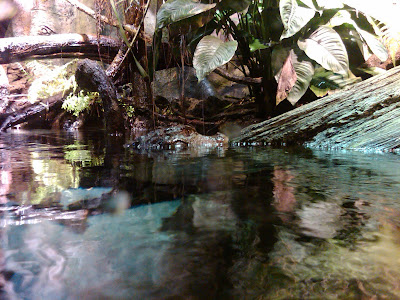 Just the head of a very mean looking reptile. 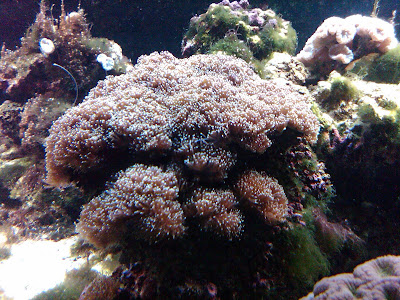 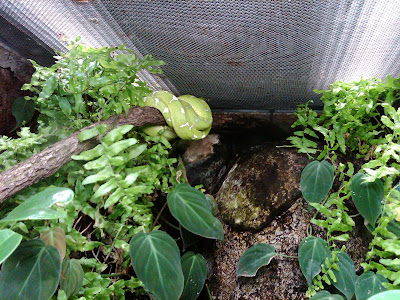 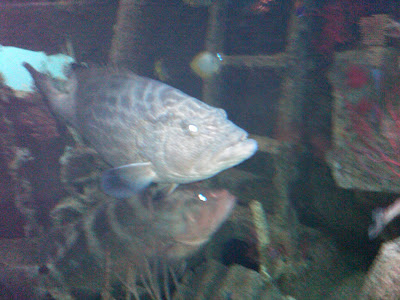 Okay, so that was the Aquarium. After that we were pretty tired from all the walking so we got a quick bite to eat and hung around the waterfront while slowly making our way back to the hotel. 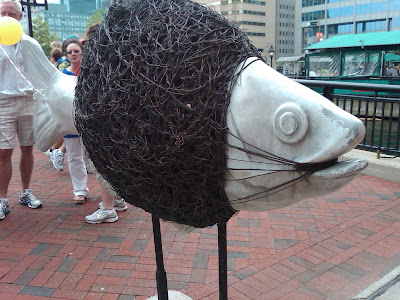 I thought this was kind of a funny sculpture so I took a picture. 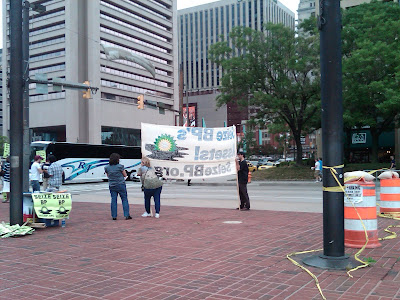 A real live protest going on over the BP spill in the gulf. The sign read, "Seize BP's Assets! SeizeBP.org" 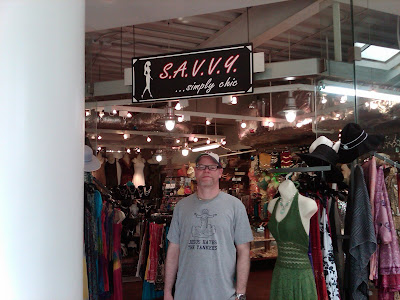 The name of this shop is Savvy and it was too much. We had to get a pic of the SavvyBeast in front of it. Too bad there was nothing in there either of us would buy. And in case you're wondering his t-shirt reads, "Jesus Hates the Yankees," which received LOTS of attention that day (it was all BoSox and Oriels fans in town which made it VERY popular). During our meanderings we came across the Hard Rock Cafe. 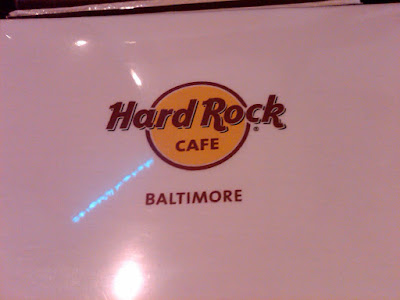 The overpriced T-shirt I didn't buy. 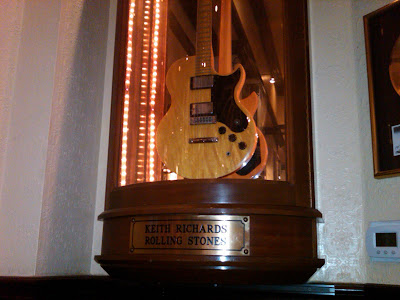 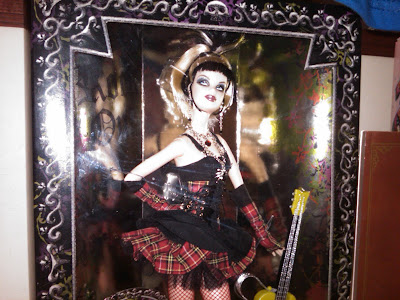 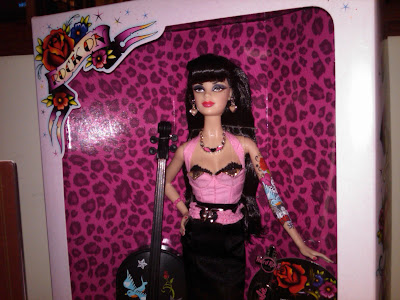 And this one, appropriately enough, is a Rock On Barbie.

One more wave to go, so bear with me.

I love the aquarium - being a science nut myself. I also really love the sidewalk art - such talent! Hope it isn't chalk. Did you gyuys fiund out what the Savvy sign actually stood for? Thanks for sharing!